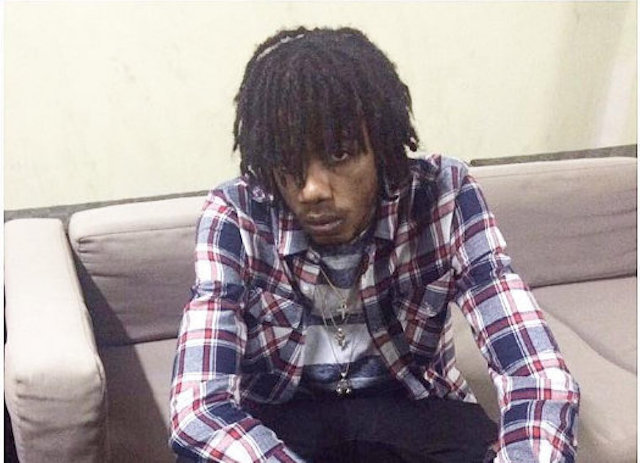 Dancehall deejay Alkaline will be held overnight in police custody where his interrogation will continue on Friday.

Let’s be clear, there are no charges currently laid out against the Vendetta head. However, detectives put him through two rounds of questioning on Thursday in the presence of his attorney in relation to the January 13 gruesome murder of Rohan Morris. Cops say that Morris was shot 15 times and killed in Maverly and his 5-year-old daughter witness the killing.

Alkaline, born Earlan Bartley, turned up at the Area 4 police headquarters in Kingston moments after 9 AM today where he was immediately grilled by investigators. He was then transferred to the Criminal Investigation Brand headquarters for further questioning. Sources told us that he will be held in a cell at the CIB over night and questioning will continue tomorrow.

We’re told that his lawyer strongly objected to police keeping him over night but that didn’t stop police from placing him in a holding cell. No details about the line of questioning was release since there in an ongoing investigation. Head of the Corporate Communication Unit (CCU), Stephanie Lindsay, confirmed that authorities wanted to interview Alkaline in relation to Morris’ murder.

Alkaline has maintained his innocence and his attorney Peter Champagnie says that his client will continue to cooperate with police officers. “He is someone who is prepared to cooperate and will answer questions that is asked of him,” Champagnie said.