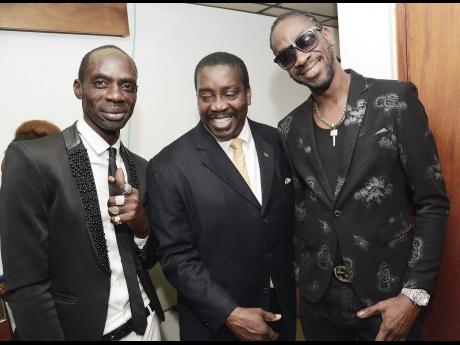 Dancehall icons Bounty Killer and Ninja Man were guests yesterday at an initiative by the national security ministry aimed at boosting the morale of its members.

The police force is on a renewed drive to create a safer and prosperous Jamaica.

At the event that was held at the Jamaica Conference Centre, both dancehall artistes provided the special empowerment seminar with their respective take on how Jamaica can achieve such a feat.

Bounty Killer told the large gathering that there is a lot of love in the country.

“We need to show more love and care to our brothers and sisters. The families and parents, they are to play their role to prevent their child from getting into violence. We can’t just leave it up to the community. We all have to play our part. So, I am saying, the police, the soldiers and the security forces play their part. We as a society need to play our part as well,” he said.

Desmond Ballentine, more popularly known as Ninja Man, stressed that it was not just the police’s responsibility to cut down crime.

Over the years, both Bounty Killer and Ninja Man have had their run-in with the law.

In 2012, Bounty Killer was freed of a gun charge and several related offence.

The prosecution dropped the case against Bounty, real name Rodney Pryce, and his co-accused in the High Court Division of the Gun Court, citing inconsistency in the reports from the complainant and a senior police officer.

The deejay and his co-accused were arrested and charged with assault and illegal possession of firearm in September 2007.

According to reports, Bounty Killer and his entourage, including his co-accused, assaulted an off-duty police officer during an incident on St Lucia Avenue in New Kingston.

Ninja Man, on the other hand, is currently before the courts for the March 16, 2009 murder of Richard Johnson.

The entertainer, along with his son and another man, was charged in that matter.

The trial, which had been transferred to the recently established special court that was designed to deal with matters on the court list for more than five years, has been lingering over the deejay’s career.