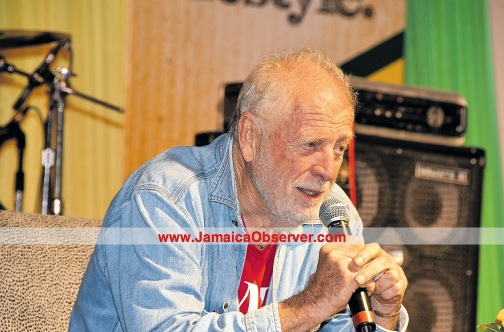 JAMAICA has the distinction of being one of three countries whose music is heard, played, and enjoyed globally.

That observation came from music mogul Chris Blackwell, who noted the other two countries are the United States and the United Kingdom. This, he stated, is something Jamaicans should be proud of and protect, attributing the popularity of the Jamaican music brand to the messages conveyed in the lyrics and music during the first 10 to 15 years of its popularity.

Blackwell was speaking at the launch of Rebel Salute, held at the Jamaica Pegasus hotel in St Andrew on Monday.

He lauded reggae artiste and event promoter Tony Rebel and his team — organizers of Rebel Salute — for remaining true to themselves and their brand.

“Rebel Salute is unique, and the truth about it is that it has stayed true to itself, its spirit, its ethics, and its culture. Because I’m sure Rebel Salute could have been more successful if they accepted commercials and endorsements from liquor [companies], and they should be commended for it.”Blackwell is renowned for his work in putting Jamaican music on the world stage through Millie Small in the early 1960s, but most importantly, The Wailers, and later Bob Marley during the late 60s and 70s through his Island Records label.

He noted, despite his love for the music, there are some elements which he has never chosen to associate with.

“I like some dancehall music a lot. But I have never been into lyrics that is negative and therefore was never interested in recording anyone who pushed negative messages. I have always been about what is positive. It is what kids love. I love Chronixx. He is an extraordinary talent. His natural timing and phrasing is not something you can’t learn… it is a gift,” said Blackwell.

Speaking at the event, Entertainment and Culture minister Olivia “Babsy” Grange also called for the protection of the local music industry.

She cited vast difference in the royalties paid out by the local rights collection agency, Jamcopy, to foreign acts versus local based ones on radio airplay. She noted that only $7 million was paid to local artistes compared to $32 million to their foreign counterparts. She called for more Jamaican music to be played on local radio.

“I would like to see Jamaican radio play more Jamaican music. It is important and absolutely necessary. It is a disgrace that we are sending so much music out of the country because we don’t appreciate our own music enough that we play more foreign music. I don’t know how many people understand what performing rights is about and what airplay does. How many of you understand that when you play a song written and produced by a foreign entity, you have to pay royalties? We have a wide range of Jamaican music; anything you want you can find being produced by Jamaicans. So I want to appeal to you to appreciate what is ours and appreciate what is ours,” said Grange.