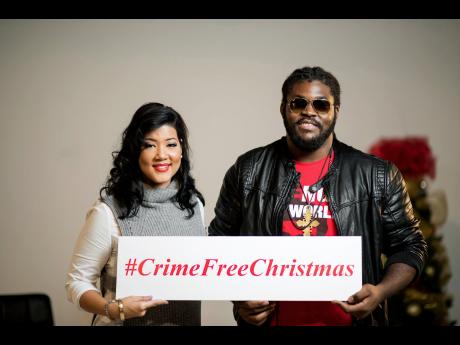 The Crime Free Christmas initiative, set to kick-start later today, has received a huge boost as several corporate entities have thrown their support behind the cause.

Pledging to join hands with over a dozen Jamaican artistes and musicians, companies such as Wisynco, FLOW and Innovative Signs are hoping to attract even more eyes to the project.

Each company contributed to the production of the campaign, which will air in local media, traditional and online. The project will feature artistes performing songs of the Yuletide season with their own unique spin. The songs will also be accompanied by a message denouncing the acts of violence that have blanketed the island in recent times.

William Mahfood, chairman of the Wisynco group, took to his company’s social media pages to encourage Jamaicans to support the cause by doing all they can to make the festive season crime-free.

“I am appealing to all Jamaicans to try to do anything possible to ensure that we have a truly crime-free and blessed Christmas,” Garfield Sinclair, managing director of FLOW, shared. “I really appreciate the hard work being put out by the artistes and others involved in putting together this worthy venture,” he said. “We need it to be crime-free for the entire year, but definitely during this festive season, the season of Christ, we want peace.”

The companies will be sharing the campaign material via their social media pages to help spread the word.

“As musicians and artistes, we can’t directly fight crime, but we can use our influence to help change hearts and minds. Our message is to encourage and inspire persons to do what they can in order to address the issue of crime in the society,” Savory explained.

The campaign will debut on December 1, with a new artiste being featured each day (excluding Sundays) over a 12-day period. The public is also invited to share the campaign online using the approved hashtag (#CrimeFreeChristmas) as Savory hopes the campaign will go viral.

The Jamaica Biscuit Company and roofing manufacturers Tropical Metal Products Limited, TVJ, Hose Specialists and Accessories Limited, and From Thought to Finish Limited are among the other corporate entities on board.