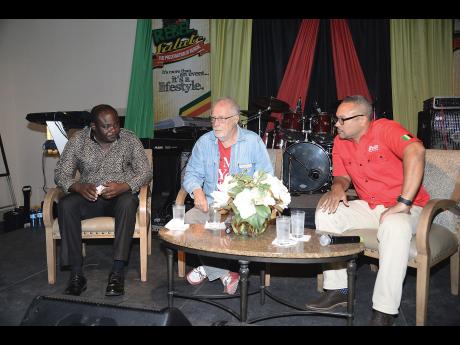 The 24th staging of the festival takes place at Grizzly’s Plantation Cove, Priory, St Ann, on January 13 and 14.

In the audience interaction section of a conversation between Blackwell and Christopher Barnes, managing director of The Gleaner Company Media Ltd, moderated by Cordel Green of the Broadcasting Commission, Blackwell was asked if any newer reggae acts had impressed him. The man who is credited with much of the international success of Bob Marley and the Wailers, Black Uhuru, and Third World, among others, singled out Chronixx.

“I love Chronixx. I think Chronixx is an extraordinary talent. He has great rhyming, natural phrasing. That is a gift,” Blackwell said. Chronixx had a guest slot with Inner Circle to do the remake of Tenement Yard at Rebel Salute 2015.

In an onstage interview, Blackwell responded to questions asked by The Gleaner Company Media Limited’s managing director, Christopher Barnes, Cordel Green of the Broadcasting Commission (who is a regular Rebel Salute host and voice talent for the pre-show advertisement) moderating the exchange.

With Green and Barnes’ professional involvement, it was not surprising that the tone was set with the thoughts of the possible communication landscape Rebel Salute will operate in on its 25th anniversary in 2018. From the outset, Blackwell spoke about Jamaican popular music’s impressive reach as it is “heard everywhere in the world.”

Having had a hand in the process, Blackwell was asked about the success of My Boy Lollipop, sung by Millie Small.

“It was a good pop record with a unique rhythm,” Blackwell said, adding that Small’s engaging personality helped as people “just really loved her”. It was “a good song, which she sang really well and performed well on TV, and anyone who met her, loved her. She had that magic.”

Being unique also applied to Rebel Salute, Blackwell pointing to its ethics and character, which includes not accepting sponsorship from alcoholic drink brands.

“I think that is fantastic!” Blackwell said of the principle behind the stance. He summed up corporate sponsorship of an event like Rebel Salute as “an opportunity for companies to push their product in front of a lot of people.

Blackwell singled out streaming as a huge change in the music business, saying that although each stream returns only a fraction of a penny, a billion streams adds up to a lot of money.

There was a humorous moment when an audience member asked a question, referring to when Blackwell was in his heyday. “When I was in my heyday?” Blackwell responded drily. “I am in my heyday now.” There was cheering in the room.

In a brief analysis of dancehall music, Blackwell said: “I like some of dancehall. I like some of it a lot.” However, he said that there are elements that he did not like as he felt that some of the lyrics were negative, which he is not into. He credited much of Jamaican music’s enduring popularity to its messages in the first 10-15 years.

Blackwell told an anecdote about why he never got involved in the festival business.

“In the 1950s when I was here, people would say anyone who brought Fats Domino to Jamaica would make a bag of money,” he said. Someone did, Fats performed at the Carib and not many people went. “I saw it with my own eyes,” Blackwell said.

Blackwell noted a major difference between Rebel Salute now being on the north coast, moving from its previous St Elizabeth home in 2013. For while the festival is in a transpiration and accommodation hub, Blackwell said, “I personally think it was great not being in a commercial part of Jamaica.”

He said that part of getting people to experience the country is pulling them out of the hotels so that they can meet the people of the interior, Blackwell differentiating between them and those who simply have a job.

Blackwell identified a number of elements that go into being successful in the music business, among them the right song, right lyrics, melody – and luck. “You can have everything right and the time is wrong,” he said.

But the major thing is, “a song that can touch people, that has a meaning, something you can play and play again and go back to 10 years later”.