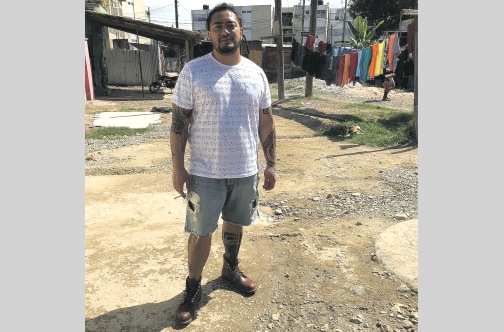 Even after a hectic day of interviews and sightseeing, singer J Boog retained an exuberant buzz as he returned to his Kingston base Monday evening.

That buzz was also evident among his eight-piece band, most of whom live in Hawaii where the burly “Boog” is based.

On his fifth visit to Jamaica, J Boog filmed a video for Good Cry, a song he recorded with Chaka Demus. Tonight he is scheduled to perform for the first time in Jamaica, at Harmony Hills in Montego Bay.

The gig is a private affair with Christopher Martin. J Boog is looking forward to it.

“This is getting our feet wet for bigger things; it’s always been my dream to perform here. Hopefully, next year we can be on a big festival here,” he said.Good Cry is one of 14 songs from Wash House Ting, J Boog’s new album, which was released last Friday. It contains collaborations with Stephen Marley (Good Feeling) and Buju Banton and Gramps Morgan (Ragamuffin).

On his previous album, 2011’s Backyard Boogie, he teamed with Tarrus Riley and Peetah Morgan on a couple of songs. His breakthrough song, Let’s Do It Again, was produced by Don Corleon.

Of Samoan heritage, J Boog was born Jerry Afemata in southern California. He grew up in Compton, one of the hot spots for ‘gangsta rap’ during the early 1990s.

While he embraced rap, he also loved roots reggae and dancehall. Those sounds can be heard on his early recordings and Wash House Ting.

He also has a loyal following throughout the Pacific Rim, New Zealand and Australia.

Relentless roadwork has paid off in terms of winning fans in remote areas of the US. A hit song would get him a national profile, but J Boog is not concerned about charts.

“If it (hit song) comes, it comes, but all we’re trying to do is make good music,” he said.