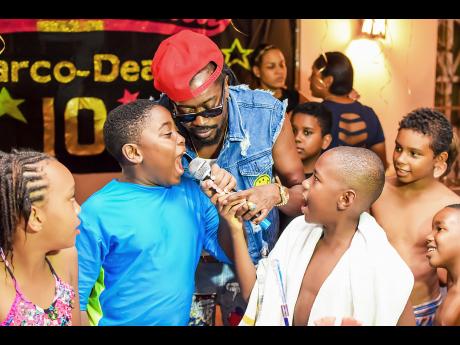 Dancehall artiste D’Angel was over the moon when her son, Marco Dean, turned 10 years old. She celebrated this milestone with a fun-filled birthday party for him in Cherry Gardens, St Andrew, earlier this month.

For the water party-themed event, the entire property was transformed by Party Plus, which provided water slides, a foam pit and a dunk tank.

According to D’Angel, she contacted Adrian Locke from Truck Back Records to help make Marco Dean’s musical dream come true. The song was then premiered at the party.

Dancehall icon Beenie Man, who is the father of Marco Dean, gave the song a big nod of approval.

However, D’Angel said she is in no hurry to make Marco Dean an entertainer.

“As much as Marco is genetically talented and is supported by both parents, he’s not being rushed or forced to do anything. Everything he says he wants to do, I’m behind him a million per cent to make sure it’s fulfilled,” D’Angel told THE STAR.

After cutting the cake, which was made by Rhapsody Cakes, D’Angel thanked everyone who attended the birthday party.