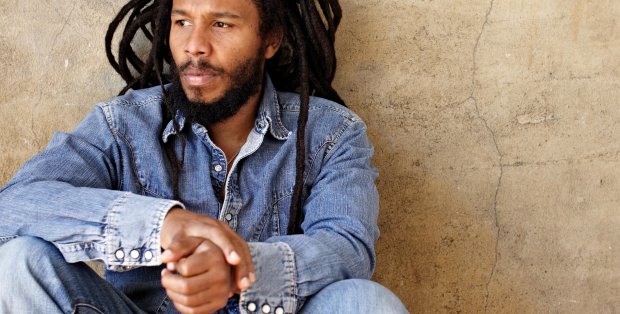 Ziggy Marley is a reggae renaissance man. He began establishing himself as a vibrant musical artist at age 10, in the late 1970s.

But the multi-Grammy-winning Marley, Jamaican-born, Los Angeles-based, has explored many other avenues — children’s book author, philanthropist, co-creator of the “Marijuanaman” graphic novel and purveyor of a vaporizer, as well as GMO-free organic cooking oils and snacks. Soon, he says,  he’ll be delving into the multimedia world.

Of these diverse pursuits, Marley says, “It keeps my brain activated, keeps the neurons growing, keeps me open-minded. It keeps the creativity going. I keep looking for new challenges.”

His latest project is “Ziggy Marley and Family Cookbook.” Available for pre-order, it will be released on Tuesday. He’ll be chatting about it and signing copies on Oct. 19, at Kepler’s Books in Menlo Park.

Filled with enticing photos, the book includes the recipes of Marley and those close to him, including sister Karen and daughter Judah. It’s a celebration of food and family. Containing meat and fish dishes, as well as vegan and vegetarian creations, it draws not only from the Jamaican and Rastafarian cultures that nurtured Marley, but also his wife Orly’s Israeli-Iranian roots.

Marley, who began inventing culinary dishes as a teenager, says, “It was an effort with me and my friends and my family. We decided to share some recipes, just for the fun of it.”

He always relished the unique juice drinks his dad would make. His father, the late reggae icon and activist Bob Marley, is still revered all over the world.

Ziggy says, “There’s two reasons — the message … and the person that is giving the message. If my father was a snob or an uptight person, then it wouldn’t get so much traction. It was because he was a humble human being and genuinely a man of love, that it gets the traction that it gets.”

He says he tries to follow that in his own life. “You want to try and not let ego be the driving force that carries us in this life, but to have some humility. That’s a very Buddhist trait, and something that’s very important for human beings in general.”Lyrically, his new reggae-rock-funk album, “Ziggy Marley,” reflects his concerns for the world, especially in songs such as “We Are The People” and “Butterflies.”

With music, he says it’s important to be uplifting, as well as entertaining. His father taught him that.

“Music is a door that can open up spirituality, that can be used for the betterment of humankind. This is a great lesson to have learned.

“Music can make the world a worse place, too. When you look at society today and you look at the music that is being played, you’ll find that the kids are less conscious. The kids are more superficial, more materialistic. The music is more superficial and more materialistic. So music really has a powerful effect on the society, for better or worse.”

Marley says he chooses his musical path without considering commerciality. “It doesn’t matter what is going on. We have to fulfill our own purpose, whatever small part that plays in the consciousness of the world, of humanity. Every little bit is meaningful.”

Ganja can enhance creativity, he says. “It depends on the individual. For some, it opens different thought processes. It leads to a different way of seeing things. But if you don’t have the inspiration, ganja’s not going to give you inspiration. You have to have inspiration first. I have inspiration without it. So it is not a necessity.”

He feels strongly about legalization. “It’s important that the truth be told, that we live the truth and that the laws reflect the truth. And the truth is that the plant is beneficial. Marijuana has medicinal benefits. And for some, it has recreational benefits. So a true society must reflect that. You cannot lie to the people and create laws that are based upon falsehoods.”

On record and on stage, Marley keeps it real. He plays San Francisco’s The Fillmore on Oct. 20.

“Now more than ever, there is a real energy in what we’re doing on stage. I keep growing, expanding, evolving,” he says. “And so it only gets more intense.”

Marley, whose family included preachers as well as musicians, seeks to better the lives of children globally through U.R.G.E. The non-profit organization acts to support education, health and the environment.

“We feel good about sharing with others, helping those who need the help. All life is about giving,” he says.

Marley, 47, explains what makes his life rewarding. “It’s to know that I am doing the work that God wants me to do — for the benefit of humankind. This is my joy, to fulfill that destiny I have been given. That is why we are inspired, because we are fulfilling that, doing the good work, spreading the good message.”

He says he understands that changes doesn’t come instantly. “You wish you could snap your finger and there would be love and peace around the world. But you must have perseverance and endurance. This is hard work. But it’s meaningful and good work. You want to see things become better. That is the challenging part, to not get frustrated, but keep working at it.”