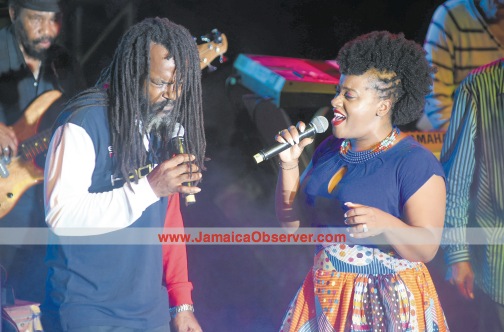 Peter Tosh’s songbook was flung open on Saturday. And what flowed from its pages provided a vivid insight into the life and work of one of Jamaica’s prolific singer/songwriters.

The tribute concert — staged by Pulse Investments, the Peter Tosh Estate and Marlene Brown, Tosh’s partner at the time of his death — celebrated the 72nd birthday of the fiery artiste who was gunned down at his upper St Andrew home in September 1987.

A cavalcade of reggae acts graced the stage at Pulse Complex in New Kingston for three hours of everything Tosh.

The organizers assembled his touring band Word, Sound and Power and from the overture, every note was worth holding on to.

Andrew Tosh, son of the reggae icon, was the fulcrum around whom the presentation spun.Seen by many as Peter’s reincarnate, his performances were dotted throughout the evening and had many taking second glances just to be sure it was not Peter on stage. The similarity in vocal tone and quality is uncanny.

Andrew delighted the fair-sized audience with tracks from his father’s catalogue, including African, Coming in Hot and a spirited rendition of Buckingham Palace. His duet on Don’t Look Back with Marcia Griffiths was priceless.

His other duet, Nothing But Love, was performed with Etana. Originally recorded by his father and American soul singer Gwen Guthrie, it could have benefited from a few more rehearsals.

American guitarist Donald Kinsey’s artistry brought Tosh’s music to life. This was evident when he riffed during Andrew’s renditions of Lord of Lords and Johnny B Good.

The supporting artistes did well.

Mermams from the Democratic Republic of The Congo was great on Mama Africa. Chronixx delighted with his set which included Arise Blackman Arise and Stop That Train. Kabaka Pyramid delivered with Haffi Get A Beaten.

Luciano was not to be outdone. His set comprised Tosh’s iconic Creation (Jah Is My Keeper), Legalize It and Equal Rights.

Third-generation Tosh, Dre Tosh, son of Andrew and grandson to Peter, made his big stage debut with Mawga Dog. Like his father, but not to the same degree, he possesses vocal traits of his famous grandfather.

For the finale, Morgan Heritage patriarch Denroy Morgan was joined by rocker Zack Starkey — son of The Beatles’ Ringo Starr — and singer Shhh Liguz for a rocking Get Up Stand Up.

Marlene Brown was overwhelmed by the experience.

“I just can’t tell you how I feel hearing Peter’s music performed like this. It just shows how timeless his music is and how much he was before his time… aprophet. My favourite track tonight were Mama Africa and Creation. When Luciano sang that I got goose pimples… Jah is truly my keeper,” she told the Jamaica Observer.

Source: Get Up, Stand Up for Peter – Entertainment – JamaicaObserver.com