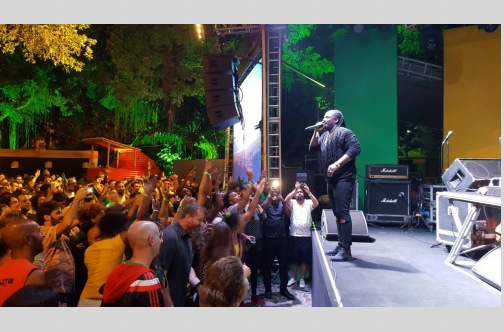 JAMAICA House in Rio de Janeiro was the most sought after place in Brazil on Tuesday night. Fresh from cheering on Team Jamaica at the Olympic stadium, Digicel ambassador I-Octane took the celebration to the venue where he kept the crowd in high spirits.

Performing hits including Dem Nuh Bad, We Love Di Vibes, Happy Time, and Wine and Jiggle, I-Octane had the crowd entertained throughout his performance. No I-Octane set would be complete without a demonstration of Jamaican dance moves.

“To perform for a crowd where more than 85 per cent of the people don’t speak English and you see them singing along and dancing and just keeping the vibes is just amazing. It made me realise just how much the world is watching Jamaica,” he said.

“This is just after seeing Bolt run live for the first time in my life, and I’m still amazed by the power of our brand—which is Jamaica. Usain Bolt came inside a noisy stadium where people were cheering and making a ‘bag a noise’ and all he did was put his finger to his lips asking for quiet and the whole place go ‘sshhh’. That just made me feel proud, and I’m still amazed that a Jamaican can come on the world’s stage and do that,” he continued.

Jamaica House has quickly become a favourite entertainment spot. Reggae singers Luciano and Ky-Mani Marley will be making appearances at Jamaica House in the coming days.