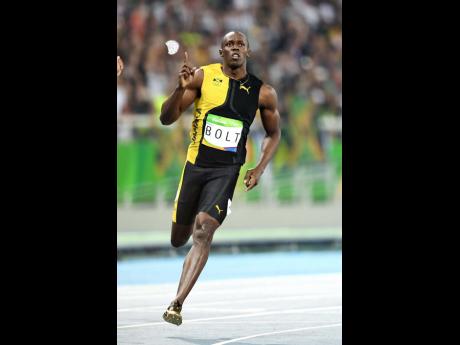 Members of the entertainment fraternity were just as enthused and patriotic about brand Jamaica’s great showing by our athletes, especially the man of the moment Usain Bolt, at the Olympics.
Bolt, who never hesitates to show his love and admiration for entertainment, was this time around the centre of attention for the Jamaican entertainers.
Ultimate legend
Following the men’s 100 metres final in Rio, last night, THE STAR canvassed the views of several entertainers who witnessed history unfold.
Singer Danielle DI said: “Usian Bolt is the ultimate legend. He is what you say is the true definition of an icon. He is the ultimate motivator, a true inspiration, I’m telling you. Jamaican royalty, rebel, The Lightning Bolt, trust mi, he is unbelievable, a remarkable human being, the history maker. The sweetest chocolate ever”.
Selector Fire Links said: “A him a the man. At one point it look like him get a slow start. Couple people well was ahead of him and the middle of the race the man just step on the accelerator. Champion a champion yuh hear, sah. A Trelawny yute enuh so yuh done know a mi parishina.”
Deejay Don André said: “Exactly what was expected. I told them Usian Bolt jog pass dem over the finish line. Nobody cannot beat Bolt to the finish line and like I prophesied, I’m just delighted to see that my prophecy was fulfilled.”
Selector Foota Hype said: “My reaction is the same as I had years ago ­ Usian is the greatest to ever do it. Some people in society may nuh like him because him party, him nuh married yet, and dem ting deh. Andrew Holness and the Government need to put up a monument, a statue now now while he is alive. There is no going around it. No other sport person in dem field a do weh Bolt a do. Dem wait ‘til Bob Marley dead, I don’t want that reach Bolt. Dem need fi put some respect on his name now, now, now.”
Deejay KipRich said: “Is not like mi never expect him fi dweet, but fi see a historic moment like that it hard fi explain. Mi feel good and beat down everything inna mi house. Mi put him up on my IG and post all the race. When mi hear dem say him greater than all Micheal Jordan, mi more than proud.”
Singjay Moshan said: “Mi can’t explain that because a the first human being ever do that. Bolt did it three consecutive Olympics. I proud because nothing can’t beat that from 2008 until now.”