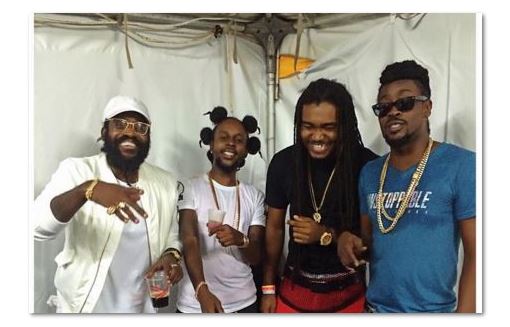 Contrary to last year where he was a part of the Pepsi Refresh Hour on Reggae Sumfest, Austill Henry, more popularly known as Zagga, was not booked for this year’s staging of the event. However, this did not stop the Destination artiste from making an appearance on both Dancehall and Reggae nights.At approximately 1am on Saturday morning, Chi Ching Ching introduced Zagga who wasted no time in making his presence felt, eliciting massive forwards from a jam-packed Catherine Hall on Dancehall night.

On Reggae night however, it was a different ball game. Billboard recording artiste Tarrus Riley called on a brightly dressed Zagga at about 6:30am on Sunday morning. He wasted no time in proving that he was definitely Sumfest material by entering with his monster hit Destination, which had members of the audience singing in harmony from the first line. Enjoying the vibe, Tarrus then went on to ask “Zagga, mek we tell them how we stay” prompting a performance of their hit collab ‘Free Up’, which had Popcaan and Beenie Man joining in, making it an even more memorable Sumfest moment.

Zagga is currently promoting ‘Hold You Down’ on Chimney Records’ brand new Toll Road Riddim, and ‘Smile‘ on the Break Away Riddim.

Source: Zagga Appeared on Both Dancehall & Reggae night at Sumfest 2016