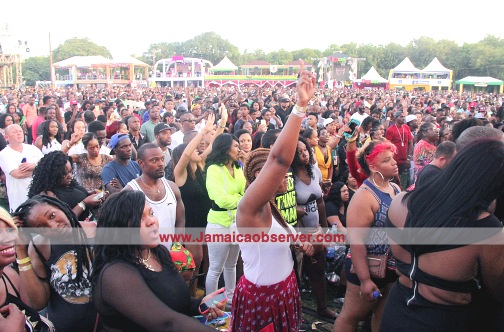 Organisers of Reggae Sumfest are more than pleased with what transpired at this year’s festival.

Deputy chairman Robert Russell says they’re not only happy with the two major live performance nights, but all the events leading up have surpassed their expectations.

“Dancehall Night was just great. Strong performances, no problems whatsoever in the park… no expletives on stage, it was just spectacular. From all reports, it went well for everybody. Saturday, the crowd was not as strong as Friday, this was expected. But this didn’t have an effect on the performances which were great. The show ran a little late, until after 7:00 on Sunday morning. We had hoped to finish earlier, but some artistes performed a little too long. These two nights came at the end of what was a great week of events. The beach party, the all-white event at Pier 1, and the Sound System Explosion, which we brought back after a few years, were all fantastic,” he told the Jamaica Observer.

Russell has no figures yet for the live Internet stream of the event, which went out globally using cutting-edge 360-degree technology, and allowed for panoramic views of the stage and venue. The numbers, he says, will come in later this week, but from the preliminaries he indicates that millions tuned into the free, live feed.

Meanwhile, Russell reveals that the organisers of Reggae Sumfest are not opposed to the possibility of international acts appearing on the festival, but that was just not the direction for this year.“The door is not slammed shut on international acts appearing on the festival. If we can find a reasonable act, who the audience here is demanding and they are not charging between US$ 750,ooo to US$1 million, their we are open to consider. But, right now, the top acts are extremely expensive, the costs are prohibitive and so it is not practical,” said Russell.

The 24th staging of Reggae Sumfest climaxed early Sunday morning at Catherine Hall in Montego Bay. Earlier this year, the event’s ownership changed hands to businessman Josef Bogdanovich. The new format saw the performances being reduced to two nights from the previous three and opted for a Jamaican-only line-up under the theme ‘Our Music Our Festival’.