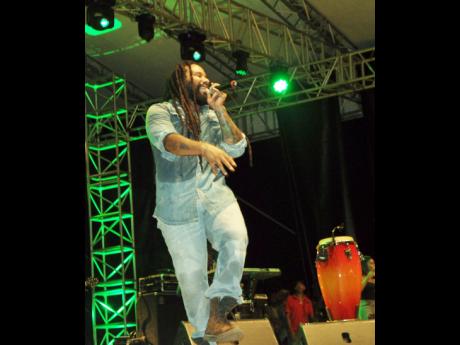 Reggae sensation Ky-mani Marley takes centre stage at the High Vibes Roots and Reggae Festival slated to take place at the Aqueduct in Montego Bay on the US Labour Day weekend, September 3 and 4. The extraordinary two-day event marks the first of its kind in the Caribbean, promising to deliver an exciting weekend in celebration of Rastafarian culture.

Marley began his career as a teenager, rapping and deejaying. He was further inspired after being asked to sing a hook to a song during a recording session at a studio. Ky-mani soon began experimenting and was signed to Shang Records, where he recorded his debut album in 1996, titled Like Father Like Son.

“We’re excited to have reggae music royalty on our stage at the High Vibes Roots and Reggae Festival. Ky-mani embodies the image that we are trying to bring across to our patrons. We strive on positivity, and Ky-mani is the perfect candidate,” explained Douglas Gordon of High Vibes Jamaica.

Ky-mani has established himself as a true, positive leader and motivational musician with his incredible, upbeat attitude and positive energy that combine to make him one of the most sought-after performers in reggae music today. Besides entertaining and making international movies, Ky-mani has also toured the globe extensively. His performance is highly anticipated.

Ky-mani says that for him, “being Jamaican, an artist and, most of all, a herbalist, it is an honour to be participating in an event that promotes the legalisation and economic empowerment of our natural plant”.

“I am looking forward to doing my part and sharing positive vibes through my music,” he added.