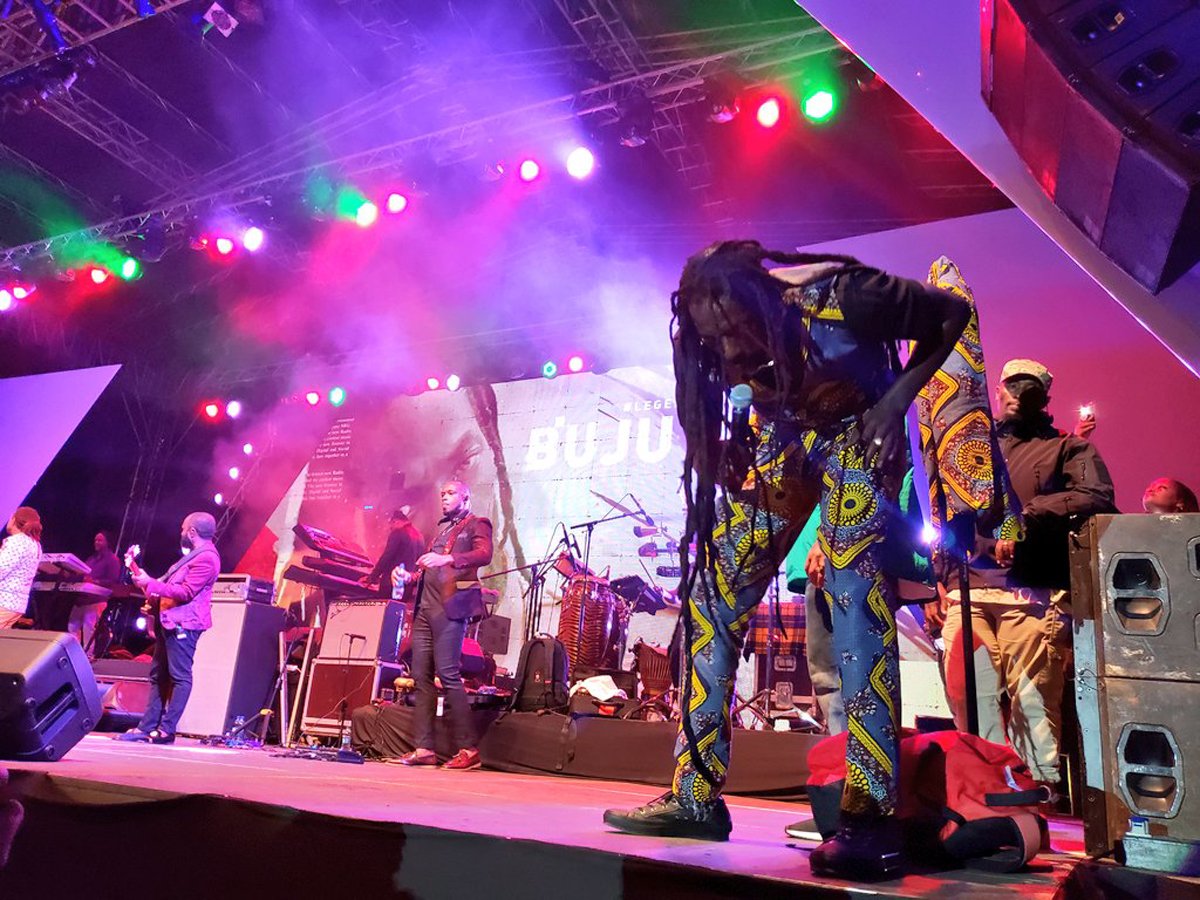 Reggae/dancehall star Buju Banton alongside his enigmatic 10-piece Shiloh Band performed his first concert in Africa following his release from prison on Saturday 15th February, 2020 at the Kenyatta International Convention Centre (KICC), Nairobi Kenya. And what legendary night of destiny it was!

A mammoth crowd turned out to watch Buju Banton aka Gargamel live again (and for the second time in Africa but first time since he was released from prison) after such a long period and of deprivement and a long walk to see him reach the motherland. 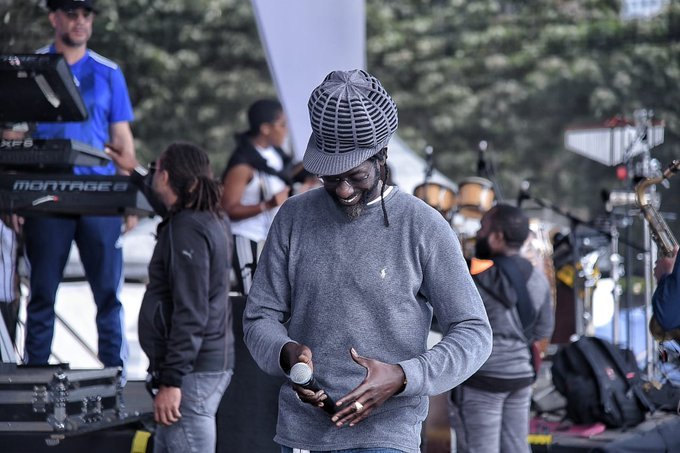 After much anticipation,speculation and a two time postponement of his show, Buju’s first performance since being released from federal prison in the U.S. could not have been held in a more fitting location – The KICC, an iconic symbol of Kenya.

The opening acts for the night were a mixture of veteran reggae deejays and MCs. DJs Kace, Double Trouble, Juan, Selector Technix and ZJ Heno with reggae crooner Lavosti and Fyah Mummah Jahmby Koikai making her first major live appearance since released from hospital, alongsize DJ Xclusive and Teargas The Entertainer turned in a rousing performance just before Buju took the stage at a few minutes to 1am. Every one of the supporting acts rose to the occasion, performing as if they knew this was one of those ‘where were you’ moments in history.

First came in members of Buju’s band, ‘Til Shiloh’ and the excitement and anticipation peaked. His stage production team ensuring everything is seamless.

Emerging from his backstage tent wearing dark shades, a goldchain, black t-shirt with matching back shoes, dressed in greyish ankara suit with matching sunflower patterns (designed by Kenya’s fashion designer, Lookslike Avido) Buju was drowned by a sea of phone lights with crowds of concertgoers straining for a glimpse of the perfect picture and video.

“How are you Africa?” Buju kicked off with ‘Mama Africa,’ sprinkling candid remarks of his hopes for the motherland. Destiny kicks in to hear his strong voice once again, proud and tall, jumping, raising his hand to the crowd draws such strong emotions in us. 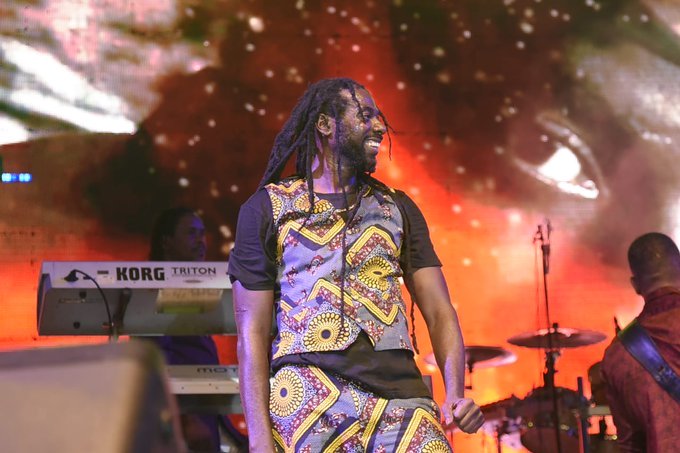 The crowd is excited and in unison lifts their hands back to him. Once again the crowd rises to its feet. Jumping up and down we sing along to It’s Not An Easy Road, before he breaks it down; “Greetings Nairobi,” his thunderous voice echoes, “It is my first time here and we just want to share this reggae music with you.”

Our voices rise again as we join him in Hills And Valleys and Lord Give I Strength, during which the saxophonist and guitarist who had towered to the front pave way for the percussionist with an interlude on a huge djembe drum. Buju is dancing as he takes turn to hit the djembe.

His production team planned this concert so perfectly and that shines throughout the stage. “Dancehall is diverse,” he reckons and the ever-blazing dancehall medleys from the star hit another peak. Cuts like “Champion” resonate with the younger energetic generation of listeners.

‘I do not know the party you like Nairobi, but what I like is a lively party,” Buju addresses the audience, ”Nairobi are you here to party?”

With that address comes in the powerful discography with Batty Rider. After touching a few more dancehall classics, Mighty Dread is an invitation to be uplifted as rasta. Switching with percussionist who pulls forward with the djembe and Buju jumps back at his spot playing the percussion. The upliftment continues with Better Muss Come.

Tying his long dreadlocks round his head in a crown like fashion, Buju does not let the overdose simmer down, quickly jumping into Cry No More and I wanna Be Loved, “We want to play something for the ladies. We have to learn to love and appreciate the African woman truly!” The ladies segment crescend builds further with Browning and Black Woman.

Pull Up The Vibes is such a joy to behold. His dreadlocks fall from his head even as he had earlier tried to tie them behind his head as knot and sometimes round his neck as a scarf. His message to Africa is clear, “Preserve and love each other. The battle is ahead.” 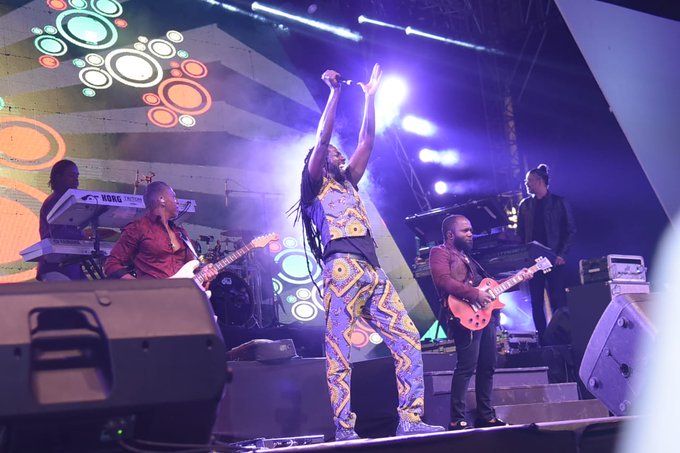 The catalogue of Steppa, Trust, Mr. Nine, No Respect, God Of My Salvation and Driver prove his legendary status. As the evening builds on, Buju invited out a special guest, Uganda’s Bobi Wine who share with Buju a warm embrace before breaking down into revolutionary music.

They tap into the magic of what music can do to create change.

The night is one for the books as staring at Buju who is dripping with sweat. He left everything on that stage because that stage needed that energy and vibration, it needed that spiritual awakening and mystical communication.

A few minutes past 3am, Banton and the Shiloh Band exited the stage and the audience gave a mighty roar of applause. Continuing from Banton and the band’s vibe, London’s best kept secret, the SilverStar Sound deejays, keeps the party going till morning.

Buju Banton’s concert will go down as a milestone in Kenya for the mighty musical genre of reggae. Surely the strong and steady lion spirit we experienced from Banton on February 15th has given all reggae musicians and reggae lovers alike in the 254 a second wind for the genre they deeply love.

While watching Banton on stage, the audience experienced that his deeper message was to unify Africans in the motherland and in the diaspora. Without a doubt, Kenyans will be hoping Gargamel returns back to the motherland sooner than later. Love and blessings from the 254. 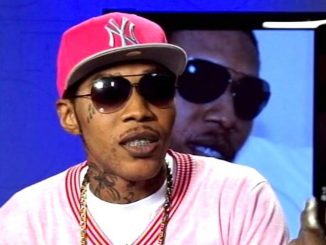 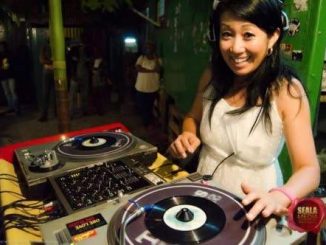 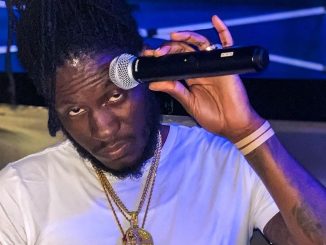 Aidonia “I Am A Legend Inna” Dancehall, But Some Fans Not Convinced