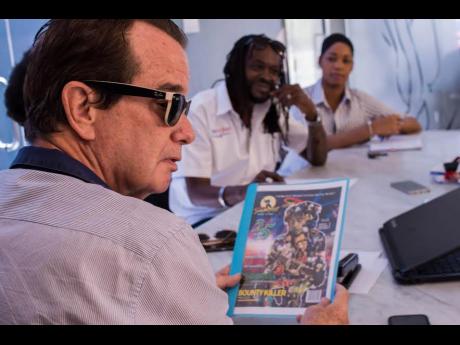 Outside of his love affair with Reggae and Dancehall music, Joe Bogdanovich, CEO of DSE (Downsound Entertainment) and owner of the Reggae Sumfest brand, has his eyes set on new goals.

This year marks the 25th staging of the festival, and already plans are in high gear to make this year’s presentation a resetting of the bar, because not only has the format changed, but so have the efforts aimed at marketing and giving sponsors more bang for their buck.

“We and Joe had always been in talks about working together,” said Karl Larmond, CEO of Pageturner Publishing House. “We are into novels and apart from music, Joe is also into movies and television production, so we have always had these talks about one day possibly turning one of our novels into a movie, but in the meantime, with him taking over the reins of Reggae Sumfest, and it being the 25th staging, we decided the time was right to collaborate on a project, and talks commenced about a commemorative magazine, then it became a magazine to celebrate the festival and also to provide corporate sponsors (who have supported the brand over the years) with access to the opportunity for added mileage, especially with Reggae Sumfest set to go on tour, as well as with launches in Florida and New York.

The magazine will cover the festival in its entirety, the past, the present and the future, and there will be a section dedicated to fashion over the years, and will also look at aspects such as the standout performers over the years, and a very interesting and maybe even controversial take on Reggae Sumfest’s next generation.

It is expected that the publication will be ready for the first launch of Reggae Sumfest which should be in Florida, in April. This publication will be available for free, both locally and internationally prior to the festival, in both physical and digital formats.

“After the initial launch of the festival, it will be available from there on out, at all launches following that, New York, Jamaica, and will literally be everywhere across the island; including hotels, lounges, gas stations, book stores, pharmacies, the airports, lobbies and on-board Fly Jamaica flights; and if you have no travel plans, then pick up a copy at your local barbershops, nail or hair salons,” said Larmond.