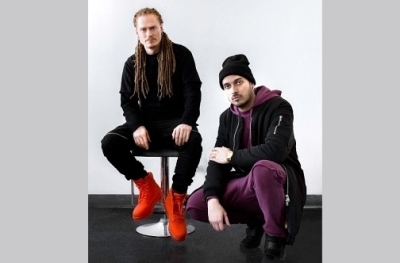 They have also remixed songs for Capleton, Busy Signal, Mavado, and Sean Paul.

Currently in Jamaica for a major project with dancehall’s new ‘it’ girl Shenseea, they are hoping to find acts with potential crossover appeal.

“Right now our focus is new artistes. People who are low profile and basically people we can grow with. The biggest challenge for any producer is to break a new artiste,” Ranx explained in an interview with Splash on Wednesday.

Shenseea has been making waves with songs like Loodi (with Vybz Kartel) and Jiggle Jiggle.

“We were introduced to her sound by Richie, one of our friends in the UK. We have been planning on coming to Jamaica for a while now, and then the right opportunity came,” Ranx added.

He said a Swedish composer sent them a song called Drum which they pitched to Shenseea. They were impressed by her approach to the track and came to Jamaica for production on the vocals.

Banx (Yannick Rastogi) and Ranx (Zacharie Raymond) started their partnership three years ago. They are signed to British label Parlophone, which is owned by Warner Music.

Both are in their late 20s.

Banx, also known as KNY Factory, was born in Paris, France. He moved to Guadeloupe at age two and later relocated to Montreal, Canada.

Ranx, who also goes by the name Soke, is originally from Ottawa, but resides in Montreal.

“I grew up in Ottawa. I started out as a DJ playing electronic, dance and rave music. I also rapped and deejayed and had a deal with a local label. After a while it was a bit too much for me, so I transformed into hip hop, dancehall and reggae,” said Ranx.

which is on Latin singer Nicky Jam’s hit album Fenix.

“It’s hard for an artiste in Canada right now, so we decided to focus on production by blending Caribbean music with pop. After our work began to circulate, labels started to approach us. We went with Parlophone,” said Ranx.

He and Banx earned a gold plaque for sales of over 400,000 copies in the United Kingdom for Olly Murs’ Kiss

Me, which they produced. The song reached number 11 on that country’s pop chart.