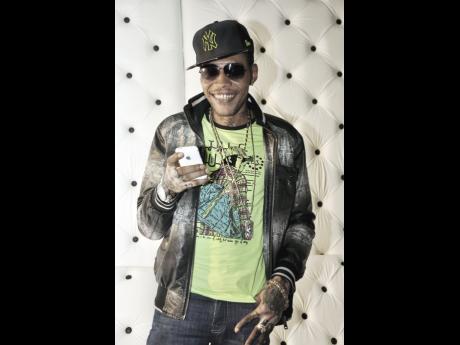 Incarcerated dancehall artiste Vybz Kartel has charted on the Billboard Hot 100, courtesy of his collaboration with overseas-based Jamaican singer PARTYNEXTDOOR titled ‘Not Nice’.

The song has peaked at number 83 on the highly competitive chart, and will be featured on PARTYNEXTDOOR’s album.

Not Nice was produced by international producer Dre Skull.

The single sees PARTYNEXTDOOR drawing inspiration from Vybz Kartel’s Girl You Too Bad, a record which was released in 2011.

PARTYNEXTDOOR has strong family ties to Jamaica and recently visited the island where he established that he was happy to visit after a decade, this he noted during his set at the recent Major Lazer in concert.

As for critics who tend to question Kartel’s ability to climb the charts despite his incarceration, Dre Skull claims the Kartel’s part in the song was taken from an unreleased Vybz Kartel record.

“New PARTYNEXTDOOR single Not Nice features a sample from an unreleased song from me and Vybz … big thanks to Party … for bringing me into this. Honoured to play a small part #notnice,” he posted to his Instagram page.

However, things also turned sour after R&B singer Ne-Yo accused then producer Notnice of copying the instrumental used on Romping Shop from his song Miss Independent. The conflict later hampered the potential international success of the song.

THE STAR contacted a few of Vybz Kartel’s business associates for comment on his success. They believe his claim to be dancehall’s king has been validated.

“That shows that he has overcome his obstacles and that dancehall cyah stall. Being on the Billboard Hot 100 reaffirms that he is the ‘King of Dancehall’ and anybody who thought otherwise should be sure by now,” social media coordinator for Kartel’s ‘Vybz’ party Chanel Ivey said.

She also feels Kartel should have been nominated for a Grammy this year and that his recently released single with Sean Kingston will also achieve Billboard success.

Shona-Lee S Thompson, the brand manager for VK Clothing, said though he is incarcerated, he is not silenced.

“He is the second most nominated artiste in the YVAs … most of the sales we get for Kartel’s clothing is in the United States and Europe. To ship to Europe is US$40 and people are still purchasing from that region so that goes to show that he is still in demand locally and internationally,” she said.