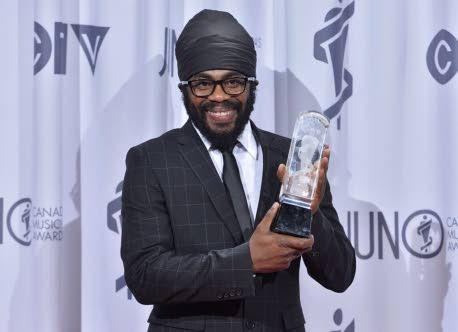 CANADA-BASED reggae singer Exco Levi is up for his sixth Juno Award nomination in the category Reggae Recording of the Year.

Splash caught up with the four-time Juno Award winner at his Ontario base and he expressed he was humbled by yet another nomination.

“It is truly an honour to be nominated. I say that all the time and people ask me if I don’t prefer to win. Yes, I do, but when you consider all that goes into just getting the nomination, this is so important to stand out as one of the nominees in the many categories of music recognised by the Juno organisation… it is really a joy,” he said.

The Juno Awards are Canada’s answer to the US’s Grammy Awards, and the nominations were announced on Tuesday. Exco Levi’s single Siren is one of five reggae tracks up for the coveted award. He is shortlisted alongside Sorry by singer Ammoye; Cry Everyday by Blessed; Jay Kartier’s Who Feels It and Roll Dem by Dubmatix featuring Gappy Ranks.

Siren was released in June last year by Reggaeville, prolific reggae producers out of Europe.

According to Exco Levi, the video for Siren was shot in the inner-city community of Waterhouse in St Andrew.

This year marks the 46th annual staging of the Juno Awards; however, the reggae category has only been in existence since 2003.

Exco Levi has been on a winning streak since 2012 when he won his first trophy for Bleaching Shop. He followed up this with wins over the next three years with Storms of Life in 2013; Strive on the Honey Pot rhythm for German producers Silly Walks Discotheque in 2014; and Welcome the King in 2015. He was also nominated last year for Hello Mama, but lost to Nah Complain by Kafinal featuring Daddy U Roy.

“I always brace myself and realise that someone else can always win. My manager is the one who is always more upbeat saying I can win this. When I look at this year’s category, any one of the other nominees can win. I really love Amoye’s song and Blessed [is a] two-time Juno winner, so any card can play. Furthermore, this is not a popularity contest. The panel of judges will stay wherever they are and listen to the track and decide what they like best on a particular day, that’s why it is such a great thing just to be nominated,” he said.

Exco Levi, born Wayne Ford Levy, migrated to Canada 12 years ago and after a number of odd jobs, decided it was the music of his homeland that would be his chosen path. He explained that he has been lucky to tour the United States, Africa and Europe, but still gives the reggae community in Canada its just commendations.

“Having been all over the world, I realise that everywhere you go there are people doing their part to keep reggae alive, just like here in Canada. The reggae community here in Canada is alive and well. The only difference is that in Europe and in the US there are a lot more reggae shows and festivals. But we are building here with events such as Jambana and the Montreal and Calgary reggae festivals.”

This year’s Juno Awards is set for April 2 at the Candadian Tire Centre in Ottawa.