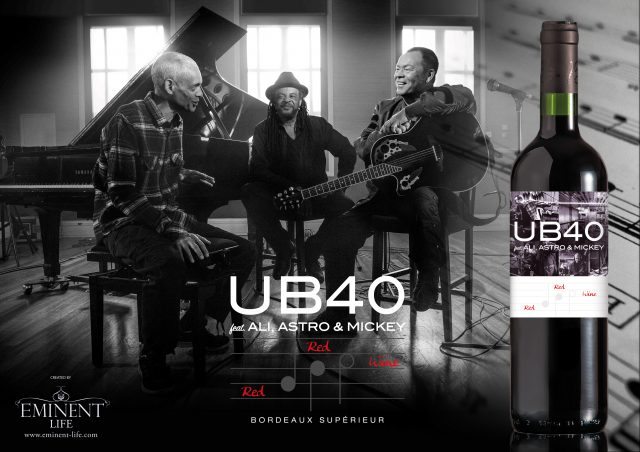 UB40 Red Red Wine featuring Ali, Astro and Mickey has been made in collaboration with Eminent Life

Or sort of. The Red Red Wine is a collaboration between original UB40 band members Ali, Astro and Mickey, and Eminent Life, a company which creates limited edition products connected to the arts. In May last year Eminent Life launched a limited edition ‘Cuvée Roger Daltrey’ Champagne to coincide with the 50th anniversary of The Who.

According to a statement from Eminent Life, the Unplugged album features “their smooth sound, which is perfectly reflected in the limited edition Red Red Wine Bordeaux Supérieur”.

Produced from a blend of Merlot and Cabernet Franc, the Red Red Wine cuvée has been vinified especially for UB40 and has a fruit profile of sweet blackcurrant, plum and cherry oh, cherry oh baby.

“The wine has a slightly jammy nose with sweet, ripe strawberries, some blackcurrant, and hint of vanilla. The palate is quite light in body, with some sweet red fruit, blackcurrant, as well as a touch of leafiness like a red from the Loire. It has slightly drying tannins, which dominate the finish, along with a kick of acidity.

“It’s basically a simple, youthful claret that one might pick up for around a tenner, so the fact it costs almost £30 makes it expensive, but I suppose it’s not being bought for what’s in the bottle.”

On the launch of Red Red Wine, original UB40 frontman Ali Campbell is reported to have commented: “We have always wanted to release our own red red wine and we’re very excited to finally be doing this!”

Astro is reported to have added: “This Bordeaux is really special and we think you will love it too!”

Jerome Jacober, founder of Eminent Life added: “I am delighted with the exceptional partnership between Eminent Life and UB40 – one of the most iconic British reggae bands. It has been a pleasure and honour working with Ali, Astro and Mickey to create the exclusive wine which is so befitting of the great track ‘Red Red Wine’.”

The song ‘Red Red Wine’ was originally written in 1967 by US singer-songwriter Neil Diamond, who imagined it as a maudlin country ballad about drinking to forget. It was picked up by UB40 who used it on their 1983 album, Labour of Love.

The track reached number one in the UK Singles Chart in August 1983 and has sold more than one million copies, according to the Official Charts Company.

Available to purchase from www.eminent-life.com at a price of £28.50, the UB40 Red Red Wine is available for pre-order now in Europe and the US.