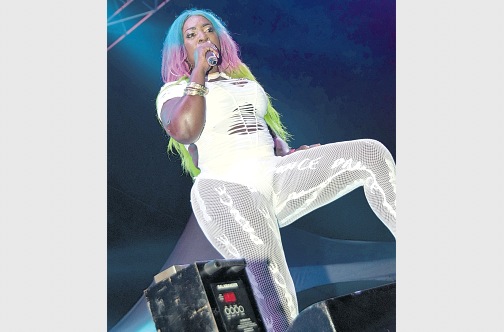 Dancehall artiste Spice has crowned herself the stage show boss, and this seems to be paying off as she had earned herself six nominations for the upcoming Youth View Awards (YVAs).

Her ability to create music that penetrates the market makes her a favourite each year at the YVAs as this year she has earned herself two more than last year.

“I feel good. I’ve been nominated for six before and I never really won as many as I thought I should, so hopefully this year I’ll get to take home more than one,” she said.

Even though Spice acknowledges her growing success, she believes that Jamaican female artistes are not given the proper recognition they deserve for their contribution to the industry.

“I remember the other day on the radio they were saying who did good for 2016; and they didn’t even mention a female in the package; it’s a male-dominated business and it’s the males they throw out there. So I feel like in Jamaica they overlook women on a whole in dancehall. I think I’m on the right path; I’m trying to change that as much as I can and I think coming this year, in 2017, with all of my hard work last year and the work that I plan to put in this year; we will start getting some recognition to change that kind of attitude,” Spice stated.

The Jim Screechy deejay notes that despite an impressive catalogue with hits like Needle Eye, Panda Remix, Sight and Whine and Bend Ova, predicting the next hit is always a gamble.

“You can never tell, ‘cause sometimes you think one is going to be it and it’s never that one… it’s something else that will run weh. Like when I did Indicator I told ZJ Sparks, who is the producer, before I recorded the song that “you’re gonna give me my next hit” and she was like ‘what is she talking about?’. But from the way how it fit the riddim I knew that girls would want to do the indicator,” Spice told the Jamaica Observer.

She admits to having a good year in 2016 with the success of Indicator, and that she has greater plans for her fans this year.

“I have a new single out now called The Sheet and I’m working on my album right now. Hopefully it will be out in the summer around my birthday. It’s my first album, so as much as I would like to change it up, I have to give them the Spice that they know, so it’s gonna be strictly dancehall,” Spice revealed.