WHEN Esther Anderson, the co-founder of Island Records, first heard him sing in a hotel room in Kingston in 1972, she knew she had not seen the likes of Bob Marley before. She also knew that she had found a kindred spirit: someone who shared her love of Rastafarianism and sought to bring those ideals to others. Thus began a six-year musical and artistic collaboration; while the Wailers worked on their seminal first albums for Island Records, Ms Anderson quietly documented their everyday lives. A new collection of these intimate photographs is now on display at the Dadiani Fine Art gallery in London.

Taken mostly in 1973—six years before Marley had become a symbol of pan-Africanism, and known for his solidarity with Third World resistance—these photographs depict a man of poetry, music and Rastafarian spirituality. There is a vulnerability and ordinariness to him: in one picture, he helps to change a tyre on the sun-parched streets of Kingston. In another, he stands on the shore of a beach, pained in thought. A black-and-white photograph captures an intimate, playful moment where he draws Ms Anderson close for a dance. He is a young rebel, pursuing self-discovery and self-liberation, but unsure of his footing.

The curators have chosen to display the relatively small prints with minimal intervention, deferring to Ms Anderson’s stripped-back approach and allowing viewers to judge this young man for themselves. Mounted in slim black frames, pictures are grouped together wherever Ms Anderson has captured several shots of Marley in quick succession. Like film storyboards breaking down one scene into several shots, only a gesture or gaze changes from one photo to the next. The effect is impressionistic; it suggests a personality that is hard to pin down, almost restlessly seeking a mould (the reggae artist, the philosopher of Rastafarianism, the spokesperson for the dispossessed?), but ultimately remaining unsettled. The “Evening Meditation” series, in particular, captures this sense of flux: here Marley paces, jogs, frowns and smiles on the beach, almost a silhouette in the blue light of dusk. A world away from the endlessly reproducible iconic images, these works offer a sense of how his fellow Jamaicans and collaborators would have seen Marley as they created, debated and travelled together.

Yet among these personal snapshots are some immediately recognisable images—Marley in his crocheted Rasta cap of yellow, red and green; smoking a spliff; palms together in a prayer or a plea for peace—but they are included in the context of a musical life and a year on the road. Suggesting the spontaneous spirit of the scenes’ capture, some versions of these images are off-centre or slightly out of focus. They are moments of authenticity, captured before Ms Anderson co-opted them for album covers and promotional material. 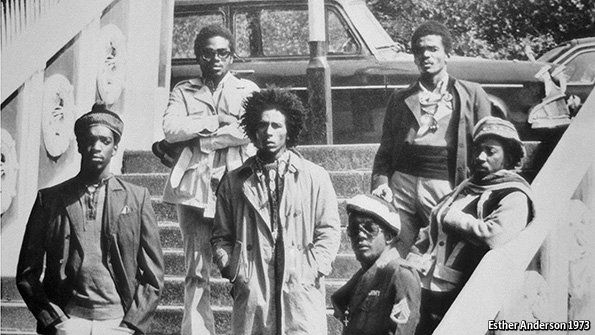 The exhibit lays waste to the idea that it was Marley alone that popularised reggae music and the edicts of Rastafarianism. Here, he is one player in a web of passionate and creative people. In “Reggae Ambassadors” (1973, pictured) the Wailers are seen relaxing on a sunny day in London, around the time of their performance at the Paris Theatre in May. Marley stands alongside Bunny Wailer—a creative partnership that was integral to the group’s early evolution—though he is leaning away from Marley and gazing past the camera; soon after, he was to leave the group for good. A spiritual Rastafarian, he could not reconcile his views with those of Chris Blackwell, the entrepreneurial founder of Island Records, who wanted the Wailers to tour clubs in America. 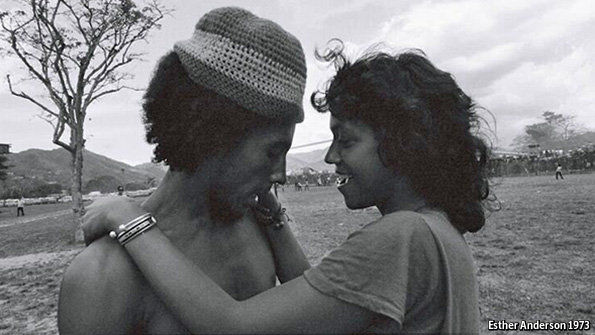 Similarly, Marley is pictured with Ms Anderson herself in “Esther Anderson and Bob Marley, Jamaica” (1973, pictured), revealing their close relationship. On the road from 1972 to 1974, she often collaborated with Marley on song ideas, incorporating their mutual pan-African and Rastafarian beliefs into lyrics that frequently referenced Emperor Haile Selassie as “Jah” (or Lord), and Ethiopia as Zion, as in songs like “Rasta Man Chant” and “Jah Live”. Such inclusions suggest the origins of his message were gradually—and collaboratively—formed through art, music, life and Jamaican culture.

It is this that is the show’s greatest strength; Ms Anderson’s work gains especial value as it rids Marley of any facile legend or militant status. He is depicted here with no indication of a particular political vision; he is not a messianic voice of third-world resistance, but a fallible, restlessly creative and melancholy man. Indeed, the photographs act like a good biography: they help shed some of their subject’s preconceived cult status, while giving some indication of why such a spiritual personality could, and did, grow to embody the idealism of his time. A must-see for Marley fans.

Source: Simply spliffing: Bob Marley, before he was an icon | The Economist