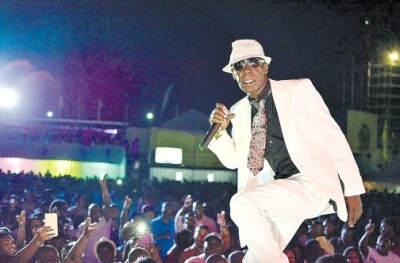 AFTER conquering Ninjaman in a lyrical battle at Tribute to Dancehall held on December 24, deejay Merciless said he is back in the recording studio working on an album. The set is slated to be released next month end.

“I found myself in the war mood, so I just eat some war food and is back to recording my album,” he told the Jamaica Observer yesterday.

According to Merciless, the 12-track album is titled Warhead Is Back. It will showcase his versatility, which is sometimes forgotten.

“I don’t want to be labelled as a clash or war artiste, because I am not. I am an all-rounder. Remember, I am the artiste behind songs like Mama Cooking and Gal Dem Gizzada, which are not clash songs. This album will highlight the versatile artiste that I am and also bring me back to the forefront, as I was out of sight for a little while,” he said.

Including in the track listings are songs like Joy to the World, Classroom, Chocolate High, and Weed Is Mine.

In addtion to Merciless, Warhead Is Back will also feature production works from Daddy Lizard, Frenz for Real Records, and Lonesome Records.

Merciless, given name Leonard Bartley, has had a string of hits since making his debut in 1994 with Lend Out Mi Mercy. In addition to Gal Dem Gizzada and Mama Cooking, he also garnered new fans with Mavis and

Mr Whoodini. He won several clashes, including a combined force of Ninjaman, Bounty Killer, and Beenie Man in a lyrical face-off at Sting 2000 held at Jamworld Entertainment Complex in St Catherine. He then went off the radar for a few years.

“Although I was writing songs and going on tours, there was a time when some persons weren’t hearing from me. A lot of producers were doing rhythms but they didn’t find me, so I didn’t find them either,” he said.

According to the deejay, he is aware of dancehall music’s evolution over the years, but is unimpressed by some of today’s top acts.

“I am going back to basic and show some of the younger generation that this is the type of music that people want to hear. Us, the older artistes, will always be here and always touring and doing music that all age group can listen to,” he said.