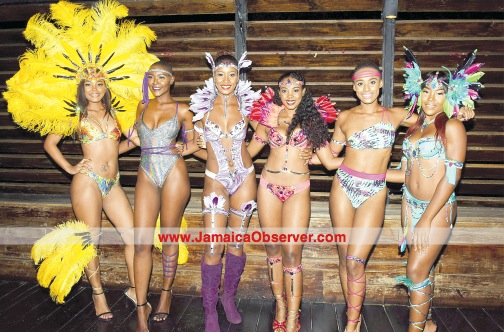 BYRON Lee and The Dragonaries’ timeless songs, Tiney Winey, Dance Hall Soca and Soca Butterfly, will be getting a make-over this carnival season, according to Jamaica Carnival director Julianne Lee.

She was however tight-lipped about the artistes involved.

“They’re really in studio now, and they’re working on it. They are international artistes (Trinidad and Barbadian) and Jamaican artistes. I’m humbled as the love for Dad and the respect, the love for the genre, their efforts and energy have certainly comforted and warmed us tremendously as a family,” she said. “We’re waiting for Trinidad Carnival to have its glory, then we’ll release our songs with our flavour out of Jamaica. The songs are ‘collabs’ with a modern twist…We’re making sure to remember the origins of this festive genre and how it was introduced to Jamaica.”

Written by Montserratian Alphonso “Arrow” Cassell, Tiney Winey was an instant hit for Byron Lee and The Dragonaires in 1985. Soca Butterfly and Dance Hall Soca, both by dancehall deejay Admiral Bailey, had similar chart success in the 1990s. The latter is credited with starting the ragga-soca craze.

“My dad — The Dragon — brought carnival to the public streets of Jamaica because he believed music transcended all barriers… He was pleased to see Jamaicans embracing a foreign culture, putting and making it our own. Throughout the years we saw the fusion of the music take place in 1992 and 1993. We saw Jamaicans put their flavour and flare on roadwear and costumes… Then we infiltrated with fusion of the music with artistes including Beenie Man and Vegas, when they did the collaborations with their original songs,” said Lee.

Lee added that her father would be pleased with the growth of carnival.

This year there are four groups operating in carnival. In addition to Jamaica Carnival, there are newcomers Xodus and Xaymaca, as well as Bacchanal Jamaica.

“We want to ensure everyone has an opportunity to establish themselves, as there is enough space for everyone,” she said.

Byron Lee launched Jamaica Carnival in 1990. He died from cancer in 2008 at the University Hospital of the West Indies at age 73. The event returned last year after a seven-year hiatus.

“We have three events leading up to our road parade… We’ll be in St Elizabeth with a blowout street dance, as well as in Montego Bay, and in Kingston we’ll have a soca in the city event. And then we’ll have our road parade on Carnival Sunday (April 23) and in between we’ll be having a Kiddies Carnival at Hope Zoo on March 25,” Lee disclosed. “We’re very pleased with this, as we think children need to understand a more wholesome view of carnival — not of what has been sensationalised — so they can come out and play and have fun.”

Costumes are on sale at Usain Bolt’s Tracks & Records and Truck Stop in St Andrew.