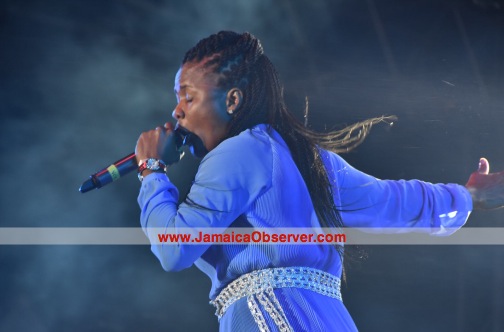 JUST over a year ago she stunned many by quitting popular music, becoming a Christian and, by extension, a gospel act. On Friday night she returned to the local stage and threw down one of the evening’s strongest performances at Rebel Salute held at Grizzly’s Plantation in Priory, St Ann.

Minister Marion Hall, formerly Lady Saw, delivered a testimony that was both moving and entertaining.

She has not lost the energy and vibe she brought to global stages for more than 20 years, with the major difference being her lyrical content.

Hall opened with her song I’m Still Standing, which she dedicated to broken women.

“It’s been a year since I changed my life. A lot of people thought they knew me, but they really didn’t. Now my writing is to give a voice to especially women. I want them to know that I am a victim of rape and I’m still standing. So I’m writing about women – those forced into prostitution, those who were raped, fallen to drug addiction – just broken women to let them know I’m still standing and this is my story.”This set the stage for the rest of her performance as she dropped more personal testimonies and the supporting tracks plotting her journey over the past year.

During the performance women in the audience could be seen wiping away tears as the artiste poured her all into this debut performance.

Hall, dressed in a flowing blue dress with long sleeves, no make-up and minimal jewellery, spent just under an hour on stage sharing her new-found joy.

She also used her set to gracefully answer her critics, including fellow artiste Bushman, whom she accused of commenting that her conversion was “a retirement plan”.

“I love you my brother with the love of Jesus. I am happy that HE has equipped me to deal with my critics and I will just tell you that I am happy,” she noted before launching into her song I Will Not Worry.

“I am not surprised that she delivered the way she did. This is what Rebel Salute is all about: it is very inclusive offering. This is not the first time we are having her performing outside her dancehall persona…we are not surprised.”