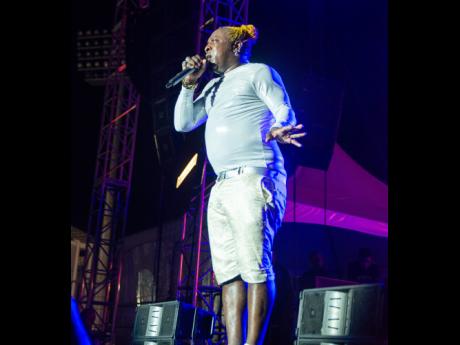 Social media sensation Facebook Hero says he does not take Elephant Man’s attempt at an apology seriously, as he believes the entertainer was making no jokes when he allegedly made threats against him.

The two have been involved in a ‘battle’ of sorts since Facebook Hero made fun of Elephant Man’s career in a video he released earlier this week.

In the video, Facebook Hero claimed that the deejay owed money to countless producers, and needed a new hit song to reclaim a spot at the top of dancehall.

Speaking with THE WEEKEND STAR, the popular social media personality said that the Energy God’s recent post ‘bigging him up’ was just for show, as the entertainer is still quite upset about the comments he made about him.

Facebook Hero revealed that shortly after the first video, Elephant Man had issued death threats aimed at him.

“When mi do di video, him mussi vex wid di part weh mi seh him owe producer serious, and when mi say ‘dutty Elephant’. But him nuffi take things so serious because if dem thing yah nuh true, him fi just look over it,” he said.

“Him call mi friend dem and a say things like, ‘bet seh Hero can’t run again or bet say Hero can’t fly again’, and all type a things. Him still vex bout it, and mi nuh know weh him a pree fa. Mi beat Popcaan bad, and put him in a bowl. Popcaan nuh seh nothing more than ‘Yute, continue do wah yah do’.”

Elephant Man has, however, denied threatening the Internet star. When contacted, Elephant Man admitted to having a conversation with Facebook Hero once, where he expressed that he did not appreciate the social media personality taking jabs at his career.

“If yuh a comedian, yah fi know how far fi tek a joke. Yuh can’t come a style mi as ‘dutty Elephant’, and a talk bout man owe producer and all dem thing deh because we nuh play dem game deh,” he said.

“Man work too hard fi dem brand fi people come disrespect. So, we did affi mek him know seh him tek a joke too far.”

Elephant Man also said that Facebook Hero’s claims of being threatened is just his way of getting attention.

“Tell him fi play the threat dem weh me send to him or to him friend dem. Him only hear say Elephant Man a wrath. Di only time I talk to dis likkle yute is when me a tell him say, ‘Yow take down da video deh’ because we nuh play dem way deh and it a tek a joke too far.”

The deejay said he would not be giving the situation any more attention, as he has already made himself clear to Facebook Hero on how far to take his jokes in the future.