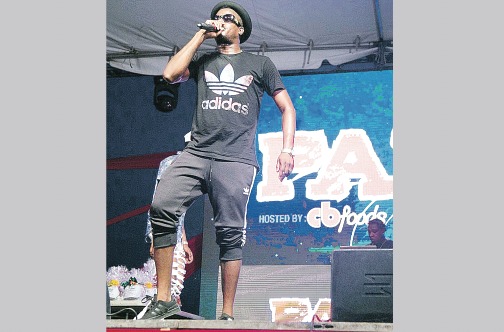 SIXTEEN years after releasing his debut single Badman Forward Badman Pull Up, dancer-cum-deejay Ding Dong is pleased with its longevity.

The single was, earlier this month, featured in the 10th episode of Lethal Weapon television series, which stars Damon Wayans and Clayne Crawford.

In an interview with Splash yesterday, Ding Dong said that although he nor producer Ricky Blaze was contacted about the use of the song, he is happy to know the track is still relevant after more than a decade and that dancehall culture is getting recognition.

“I still have not seen the clip. I was only informed about it by others. I am not sure why we were not contacted, but it is a good feeling to know that the first single that I ever recorded is still doing well. Such a venture goes to show that dancehall is alive and is receiving heavy attention overseas. Such a movement is a blessing for me and the dancehall culture,” he said.

In the 54-second lead-in to of the episode, the song can be heard playing in an EDM mix at a silent party inside a night club. The

Fox TV show is based on the

Lethal Weapon film franchise in which a slightly unhinged cop is partnered with a veteran detective trying to maintain a low-stress life.

“I was confident that the song would be a classic that is going to be played for a very long time, as it has an accompanying dance, and although it was recorded years ago, the younger generation latched onto the words and move. Even a two-year-old finds it entertaining,” he said.

“The song, even if it is remixed in EDM style, it is still doing a lot for our culture as the raw authentic accent cannot hide. Once it is played one is going to instantly hear the Jamaican accent,” he added.

Ding Dong, whose given name is Kemar Ottey, is best known as leader of the Ravers Clavers, whom he credits for keeping dancing at the forefront of dancehall. He and his team are the creators of dance moves like Nuh Linga, which got a major boost in 2008 when Usain Bolt celebrated his three victories at the Beijing Olympics by performing it.

Ding Dong’s other hit singles include Holilday, Coolest Summer, Shampoo and Yeng Yeng, which all have accompanying dances.