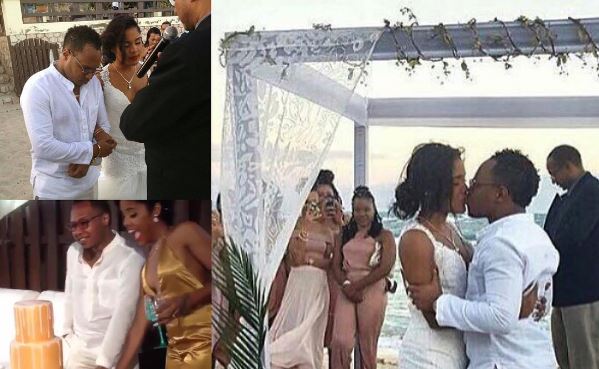 Jamaican singer, Denyque Welds whose stage name is Denyque decided to start the New Year as Mrs. Mullings. She actually got married on New Year’s day. January 1st 2017, to her long time boyfriend, Careem Mullings. She wore a beautiful white bridal gown, the ceremony was held by the sea.She had posted on Instagram earlier, when they got engaged on October 15th 2016. She also said this union was the biggest blessing in her life, it is clear that she is happy and they are in love.

The Recording Artiste/TV personality has released songs like “What About Love” featuring Chino, “Super Girl” , “Proud Wifey” and “Make me Believe You”.  She was also a finalist in the Miss Jamaica Universe Competition in 2016.

Denyque’s social media page has been covered with congratulatory messages from her fans. She has been overwhelmed by the out pouring of love. She has written posts about the ups and downs she faced in life, during the time she was preparing to get married. But she still says 2016 was a great year for her.   And she is hoping that 2017 will be even better still.

She remembers how her fiance always asked her what she had accomplished from doing x or y? And she would always tell him “knowing that I was fighting for the greater good and doing the right thing.”

She wants to keep hope alive as she continues on her journey, trying to have an impact on the lives of others. She says she is forever humbled and grateful, as she gives thanks for her many blessings.