Chris Brown has suddenly pulled out of his scheduled headline slot at a Dubai music festival, little more than a month after axing his Australia and New Zealand tour.

The controversial star was set to headline RedFestDXB on February 2, but this morning (January 8) organisers quietly slipped out news on Facebook that the appearance had been cancelled. Minutes later a press release was circulated announcing that G-Eazy and Sean Paul would instead perform at the weekend festival’s opening night.

Organizers blamed “scheduling conflicts” for Brown’s cancellation, and offered fans refunds. The news comes after the sudden axing of Brown’s Australia and New Zealand, just a week before it was set to kick off in early December.

It was speculated Brown’s criminal record may have played a part in the U-turn, with Australian officials neither confirming nor denying that they had rejected the performer’s visa application, according to Time. 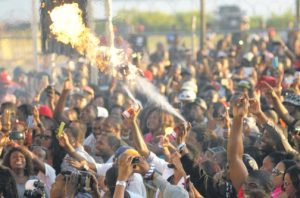 “People need to understand, if you are going to commit domestic violence and you want to travel around the world, there are going to be countries that say to you, ‘You cannot come in’,” Michaelia Cash, Australia’s Minister for Women, had said at a news conference in September.

Either way, instead of Brown, pop fans have two different consolation prizes in G-Eazy and Sean Paul.

California-born rapper G-Eazy is best known for 2015 hit Me, Myself & I. A perennial visitor to the Emirates, Grammy-winning Jamaican talent Paul returns fresh from headlining Abu Dhabi’s Beats on the Beach in November.

Both acts join Daya and The Veronicas on the opening Thursday night concert, on February 2. The longer Friday, February 3 session will welcome Demi Lovato, Mike Posner, Tove Lo and Alessia Cara to the stage to round out one of the biggest music events in the UAE calendar.

For more on RedFest visit www.redfestdxb.com/