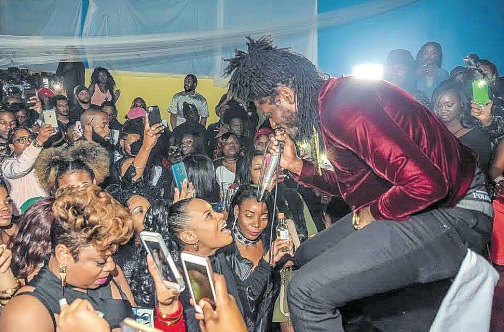 IT’s been more than six years since dancehall artiste Aidonia performed in Atlanta. His fans came out in large numbers at the Club Red Hills Ballroom in Lithonia on Friday, December 30, to hear his catalogue of hits.

Patrons braved the cold conditions and stood in long lines outside the venue prior to the start of the event.

Both worked their way into the hearts of the patrons as they delivered creditable performances prior to the main act, Aidonia, who took the stage shortly after 2:00 am.

Female members of the audience rushed closer to the stage, and cellphones were taken out to capture the dancehall artiste who delivered a show-stopping performance.

“This is the first major stage show that I have done and believe me, the response has been overwhelming. Most of the patrons have been saying that it’s their dancehall show for 2016,” promoter Chunky Wiggz told the Jamaica Observer.

Aidonia used his years of experience to interact with patrons while reeling out the hits.

Atlanta has a large dancehall fan base, but live performances have not been frequent in recent years.

“For 2017 I am working on a lot more shows. The demand is there and we want to satisfy the requests of the fans,” Chunky Wiggz added.