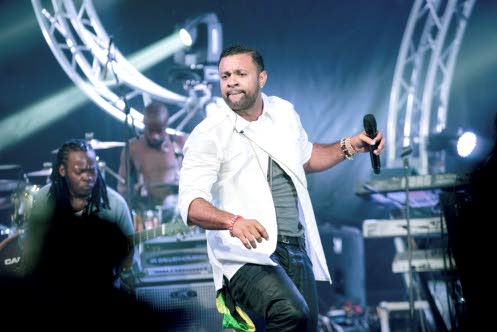 In accepting the 2016 CVSS (Council of Voluntary Social Services) Hall of Fame citation on behalf of Orville ‘Shaggy’ Burrell, his wife Rebecca declared that the artiste had been donating to the Bustamante Children’s Home at least 10 years before he launched the annual Shaggy & Friends fundraiser. But he took the decision to get fully involved in raising funds for the institution after his Hot Shot album sold 10 million in the USA and an additional 13 million worldwide earning him a Grammy for the Best Reggae Album in

“He has a heart of gold and while growing up with his grandmother she would say that Shaggy was kind until him fool,” Rebecca told the audience at the third staging of CVSS Hall of Fame & Volunteer Awards banquet held at the Jamaica Pegasus Hotel in New Kingston recently.

Shaggy, who was inducted, was unavoidably absent. However, his citation was presented to Rebecca by Prime Minister Andrew Holness.

In noting that she had to be protective of her husband’s heart, Rebecca said Shaggy would give away the shirt off his back to anyone in need. “I have to be the Farrakhan behind the Ghandi,” she said.

“It takes (great courage) to stand up and say I do not want to see people suffer and I want to make a difference. So I congratulate all the volunteers who received awards tonight for standing up for a cause.”

“We at the Shaggy Make a Difference Foundation are not about accolades, although we thank you for the recognition. We are about seeing children being healed and nurtured,” she said.

She paid tribute to the team which has made the annual Make A Difference fundraiser a success, including Dr Lambert Ennis, retired head of Anaesthesia and Intensive Care at the Bustamante Children’s Hospital, who has given Shaggy immeasurable support over the years in his quest to help the institution.

As of January 2017, the Shaggy Make a Difference Foundation would have donated 1,000 pieces of equipment to treat over 77,000 children each year at the Bustamante Children’s Hospital. The foundation has raised over $255 million since 2009 through its Shaggy & Friends event.

“We are so pleased that Rebecca has accepted this award on Shaggy’s behalf. Their commitment to health care for children must be acknowledged and celebrated, and we hope that we have done that tonight,” said Saffrey Brown, chair of the CVSS’s Volunteer Awards & Hall of Fame.