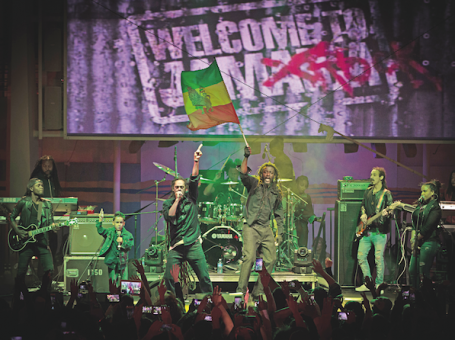 NOW IN it’s third year, the Welcome To Jamrock Reggae Cruise is firmly established as the one of the premier music cruises in the world.

The brainchild of Damian “Junior Gong” Marley, the Cruise is a reggae lovers dream – five days on the high seas, leaving from Florida and routing through two stops in Jamaica before returning back to The Sunshine State.
Hosting 3,000 cruisers aboard the Independence Of The Seas ship, Jamrock promised a mix of highly produced nightly concerts, an exclusive Sound Clash at sea and the world’s leading reggae DJ’s with entertainment 24/7.

Leaving on Monday from Fort Lauderdale, the first night line up saw Kelissa and Chronixx dazzle the crowd with accomplished performances on their debut on the cruise. Star of the night was undoubtably Sean Paul, whose international status was on full display to a capacity crowd. The night was concluded by a real reggae legend – Toots Hibbert. His sixty minute concert showed the class and catalogue of the man and he managed to engage the audience throughout with hit after hit after hit.

Tuesday saw the ship make it’s way towards Jamaica, and not even the adverse weather conditions could stop the vibes. Young Romain Virgo proved his credentials as one of the future stars of the genre with an accomplished performance that was followed by a trio of legends – Marcia Griffiths, Tarrus Riley and Mr Hitmaker himself, Vegas.

One of the alluring elements of the cruise is the informal nature of it – stars and cruisers all intermingle throughout – from showtime to dining together, and the positive energy is quickly spread across the ship. Day three was a day on dry land – Montego Bay to be exact. As passengers disembarked, a new series of Jamaican based artists got on board in time for that evening’s performances and what a night it promised to
be.

Agent Sasco aka Assassin kicked things off before Jah Cure came out to wow his female fans fresh from his controversy in the Bahamas, where it was reported that he was involved in a fight and subsequently arrested. The highlight of the night was witnessing Bounty Killer and Beenie Man on the same line up and really showing the new generation how to do it – both had sets of over one hour, packed with their hits, and stage performances that graced the setting. The raw and blunt delivery of Killer matched by the smooth and comedic delivery of Beenieb– a real moment to savour.

Bad weather forced Thursday’s proceedings to take place inside the 1,200 capacity theatre, and this meant that Damian Marley pushed his performance to Friday in the hope of delivering his set outdoors on the main deck. The UK’s Steel Pulse were the highlight of the stage show, having the multi-cultural audience lapping up their forceful
roots rock reggae.

Later that night saw the second annual “Soundclash At Sea”- featuring defending champions from Japan Mighty Crown alongside Canada’s King Turbo plus Jamaica’s Tony Matterhorn and Fire Links. This encapsulated the true spirit of dancehall, with good natured banter, exclusive tunes and a crowd who were very responsive to the skills on show. In a tight race Mighty Crown prevailed as the winners of the title once more.

So to the finale, and what a stellar line up – Mr “One Blood” Junior Reid set the speed early on before the Gully God Mavado stepped up to deliver his eagerly anticipated debut on the Jamrock Cruise. He delivered on all fronts, with “So Special” being a standout moment.

The Marley brothers closed out festivities, with Stephen stepping up first and showcasing his latest album “Fruit Of Life”. It’s easy to tell that this polished performer has been touring all over the world, as his tight band and clean delivery was superb. The final act of the night was the Captain of the ship, Damian Marley, who fittingly showed why he is at the helm of the reggae industry – as brilliant as ever, he also gave previews of his forthcoming album “Stony Hill” with tracks “Caution” and “Nail Pon Cross”. The crowd lapped up ever minute of it as we sailed our way back to Fort Lauderdale.

An amazing concept, delivered in an ultra professional and engaging manner, the Welcome To Jamrock Reggae Cruise should be on everyone’s to-do list for 2017.