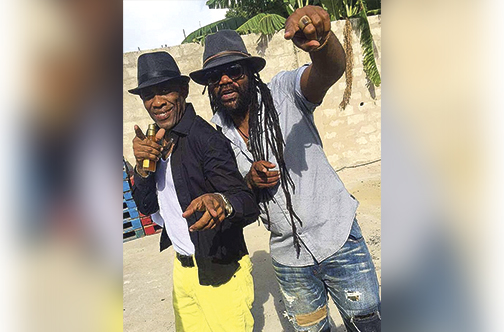 Tony Rebel and Wickerman got their start in the music business when the flat-footed hustle was still vogue. They encourage new artistes to go back to basics on Show Dem (Inna Di Street), their new song.

Produced by Dirt Works, the song is released on the 360 rhythm.

“The focus of the song is to put all the methods that we have used over the years to contribute to this great music, and to a larger extent our culture. The song is a teaching tool for those who [are] humble enough to learn from those who have been there, done that,” said Rebel in an interview with the Jamaica Observer. “There are many youths who are popular but still don’t apply the simple way of making songs or to perform them, hence this song.”

Dirt Works, according to Rebel, are “a group of Jamaicans from St Catherine now residing abroad.”

He and Wickerman burst onto the music scene during the 1980s on sound systems in their native Manchester and Spanish Town, respectively. Rebel played a pivotal role in the roots revival of the 1990s, while Wickerman formed a solid partnership with fellow deejay Captain Barkey.