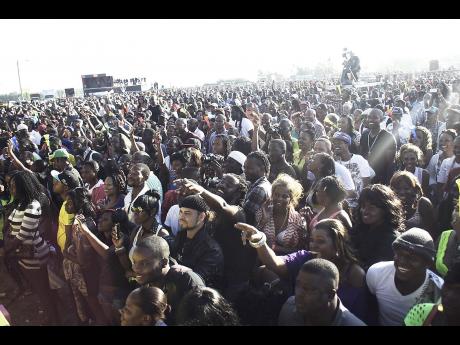 Shows like Sting offer more than entertainment for members of the public. Vendors, for example, seek to cash in as soon as an event is announced.

And with Sting being a staple of the Boxing Day experience, many persons include it on their calendar of events from which they seek to earn.

With the revelation that the so-called greatest one-night dancehall show on earth will not be held this year, some vendors are disappointed.

Don Hamilton, told THE STAR that the cancellation of Sting is a wrong move.

“This is a blow to us vendors as I would love the opportunity to eat a food this Christmas,” the Portmore, St Catherine, resident told THE STAR.

Nuts Boss, a peanut vendor, told THE STAR that he normally gets good sales at Sting, and that the fact that Jamworld will be empty on Boxing Day is a major disappointment for him.

He, however, said that Sting’s cancellation will not hurt his business.

Christopher Ellis said the cancellation of the Sting show will certainly affect is sales for the Christmas season. He reasoned that the one-night show normally gives him roughly the same amount of money that he would take a week to earn.

However, Paulette Brown, does not feel the fallout will be major.

“In the past, ladies usually come to me to make their outfits for Sting, I am not seeing that trend anymore. The ladies are more buying ready-made clothes to parties, not necessarily Sting,” she said.

Venjance, a dancehall artiste, said that entertainers like himself will feel the pinch with the fallout of Sting, as the show has developed a reputation for ‘busssing’ artistes.

“The organisers of Sting should not have abandoned Jamworld. They should have gotten five sounds and give the people Sound clash. They would have got a good crowd,” Vengance said.

Sting’s publicist Keona Williams said that organisers decided to not host the event this year in the same format. She said that the inability to secure a headline act and poor ticket sales as the main reasons for cancellation. Instead of the Sting Jamaicans have grown accustomed to, the show will be a private, black-tie invitation only event.