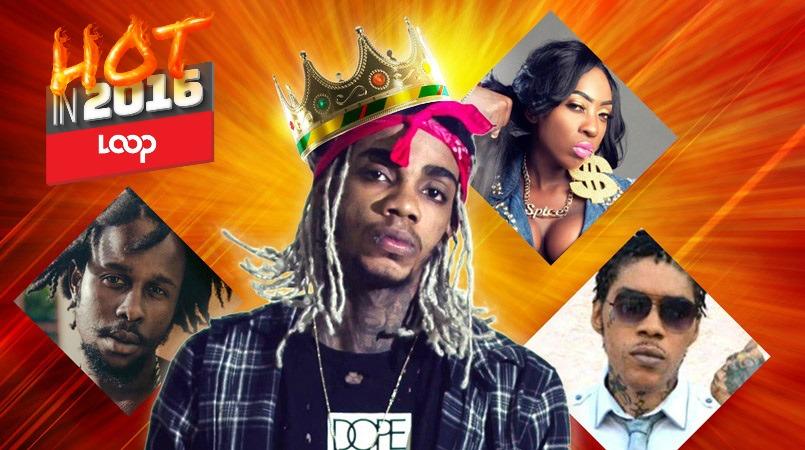 Dancehall is a competitive industry. Today you’re on top, tomorrow you’re not.

Loop News, as part of its year in review, is ranking the top 10 dancehall artistes of 2016, based strictly on the music the deejays created.

In our estimation, the top artiste in 2016 was not the ‘World Boss’. Some dancehall fans will certainly disagree with, and possibly be angered by, our selection. But we welcome the input of critics. See Loop’s Hot in 2016 rankings for dancehall artistes below.

Although he doesn’t have the clout or pull of his contemporaries in Jamaica, Charly Black has diligently built up an impressive resume of hits and chart-burners during his career. He soared to new heights this year when his breakout hit, Gyal You A Party Animal achieved diamond certification in Panama, Nicaragua, El Salvador, Belize, and Guatemala, according to his representatives at Universal Records. The diamond certification in Latin America equates to a record that has sold in excess of 600,000 units.

Although he tragically lost his brother in a much-publicised suicide this year, Konshens has continued to do well with songs like Girls Dem Sugar and Bruk Dem Off, the latter of which registered over 7 million views on youtube.

Demarco is presently riding high with the single,  Backaz, one of the biggest singles in the street dance circuit this Christmas season. The deejay is booked to appear in shows in countries such as  Belize, Grenada and Atlanta, USA within the next few weeks. He has upped his street cred with songs attacking Mavado such as  King Kong, and the followup diss, We Run the World, both of which registered several hundred thousand spins on youtube. He was also a feature artiste on Gonna Take a Miracle, alongside newcomer Keda and Vybz Kartel. The song, which samples the hook from R & B star Deniece Williams’ hit song, has racked up over 2 million views since its release.

Dancehall artiste Masicka has continued his rise as the Young Genna from the Genahyside. He recently scored big with a collaboration, Top Rank with Alliance leader Bounty Killer, and his Top Striker single and video have racked up 200,000 views since its release and the song is now bombarding FM radio. Masicka  is fast gaining traction in the Caribbean/ He did manybig shows this year including Reggae Sumfest and Britjam, and he toured Canada in June. His songs, Hardball, Buss the Cylinda and Answer Me featuring Ishawna did well overseas.

When it comes to dancehall, Spice is the lone female in the power rankings as her consistently excellent work and singalong hooks have made her the reigning queen of dancehall ever since Lady Saw abdicated the throne for the world of gospel and for the sake of her immortal soul.

Popcaan has dropped a few places in this year’s power rankings because he lost a lot of street cred when he threw in the towel at the height of the lyrical war with Mavado, especially since it appeared that he was clearly being manhandled by Mavado. He has continued to do well internationally, and locally he cemented his place as a bonafide hitmaker as he scored hits such as Christmas Gift, Ova Dweet and We Still a Win. He is reportedly on the verge of being signed to Drake’s OVO label, so 2017 may well be a bounce back year for Popcaan.

Sean Paul had a breakout year with a Grammy Award nomination in the Best Pop Duo category with Sia for Cheap Thrills. In the face of his many detractors, who criticise him for being a ‘pop artiste’, Sean Paul continues to fly the dancehall flag high internationally. His Tek Weh Yuh Heart collaboration with Tory Lanez went number one on its first week of release on the Billboard Reggae Digital Songs sales chart. He also scored with No Lie with British song writer Dua Lipa.

Mavado kept up the pace with the hit song, Progress, but also showed that he still has kept his edge when it comes to the grimy side of dancehall with his abbreviated war with first Popcaan where he annihilated the Unruly Boss with Beat and Teach and then took on Vybz Kartel with Mr Dead and Nuh Friend Fire.

Vybz Kartel is a God among insects when you look at the world of dancehall. Incarcerated for almost five years, he has continued to churn out great hit songs at an incredible rate with songs like Fever, Colouring This Life, and Miracle racking up millions of views on youtube and dominating the airwaves and the dancehall space. He remains ‘Addi the Teacha’, the greatest deejay of his generation and the resident kingmaker as his collabo with Shenseea has racked up 3 million hits in only one month, setting her on the path to stardom.

Although he was snubbed for a Grammy nomination with his commercially successful album, New Level Unlocked, Alkaline holds the top spot on the LOOP HOT IN 2016 rankings. Exclusively produced by DJ Frass, the album was arguably the most critically-acclaimed dancehall album of 2016. He showed that he deserved the top spot with songs like City, Extra Lesson, Formula, My Side of the Story, Company and Afterall while a collaboration with Mavado called Dead to Me racked up millions of views. To underline his dominance, he released Badness it Name four days ago and has racked up 470,000 views already. Alkaline was the ‘King of the Dancehall’ in 2016.

Source: LOOP HOT IN 2016: Alkaline was ‘King of the Dancehall’ | Loop News Jamaica