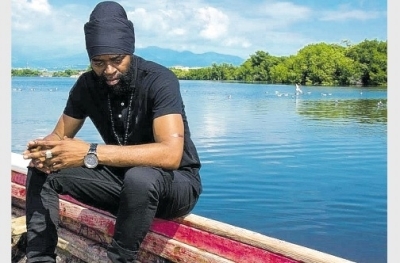 Dancehall singjay Bugle is gearing up to release his sophomore album titled Be Yourself in February of next year. The album comes almost two years after his debut, Anointed.

Speaking with the Jamaica Obsever yesterday, the Rastafarian artiste said the 15-track album is for everyone who appreciates “real” music.

“I think there is a something there for everyone, based on the range of topics covered,” he told the Observer.

Bugle’s debut album, Anointed, was hailed as one of the better sets by critics in 2014 and earned him a spot on MTV Jams with Move Dem, featuring Julian Marley. An extensive tour of Africa, Europe, North America and the Caribbean would assist in the promotion of the set. But even with that success, Bugle said Be Yourself will be his best work yet.

“This second album is different because, unlike Anointed, it’s an authentic reggae album. It only has reggae songs, no dancehall, and it also shows my growth as an artiste in terms of the production quality and the topics which I sing about,” he said.Be Yourself features collaborations with Tarrus Riley, Sizzla Kolanji, Shaggy, new sensations Rockaz Elements and Shensea.

“I really believe this project is going to resonate well with the people and, therefore, I am taking a very strategic approach to the marketing campaign,” he said.

While he hasn’t released all the tracks, Bugle is optimistic about his latest project

“To be honest, I am excited about the entire project, so it is difficult for me to single out a particular song because you know when it’s released everybody will have their favourite,” he said.

Be Yourself was produced by Bugle, Dunwell, Mr G, Kunley (of Ward 21), and Teflon Zinc Fence.