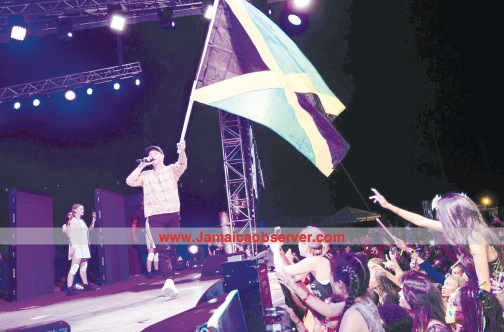 ALL is set for tonight’s staging of Major Lazer & Friends, according to organizers.

Now in its fifth year, the EDM show is scheduled for Mas Camp in St Andrew.

“The production will be even bigger than last year, doubling the intensity. We have amazing performances planned and an incredible light and sound show,” said Kamal Bankay, event organizer.

“We have a couple surprises up our sleeves. I’m 100 per cent confident everyone will have an amazing time. Security is in place, production is set,” said Bankay.

Major Lazer’s Walshy Fire is promising a memorable outing.“The year is almost at an end; what better way to close out 2016 than with an electrifying concert with some of Jamaica’s best in the entertainment industry? My advice to everyone: Just come out and let’s have a grand time. Last year was amazing and this year will be even better. I’m sure you don’t want to miss it. This concert will be an experience you will never forget,” Walshy Fire told the Jamaica Observer.

“This is really an exciting time for Major Lazer. This is the fifth-consecutive year that we’re bringing back the concert where it originally started. It feels amazing and we’re truly excited and blessed and every positive word that you can think of. We have new songs with Nicki Minaj, Party Next Door, lots of artistes. Been working on a bunch of new music the past couple of months, so there’s a likely chance we’ll debut some of it here in Jamaica,” he continued.