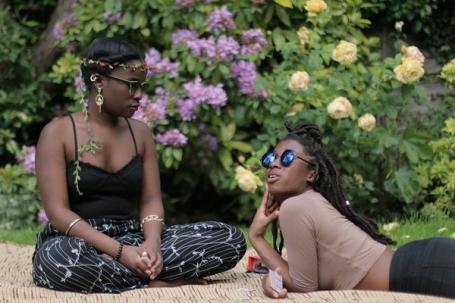 Directed and written by Cecile Emeke, Ackee & Saltfish takes you into the lives of Olivia and Rachel played by Michelle Tiwo and Vanessa Babirye. The dynamic and often hilarious duo engage in witty banter across various topics, from debating the purpose of ‘backbread’ and dancing around carpet shops, to drawing our attention to more important issues.

The amazing series perfectly embodies black female friendship, whilst shot in a unique single-cam aesthetic where the dialogue takes you beyond the surrounding four walls to various shots across London town.

In an interview, Emeke says that she was inspired by “the everyday experiences and conversations had during a time when the whole of London was quickly being gentrified.” Emeke’s ability to capture black sisterhood free from stereotypes so commonly associated with black women, is only a fraction of what makes this show worth watching.

Catch Ackee & Saltfish on BBC Three on Wednesday (Nov 30), and catch up on the previous season on YouTube.