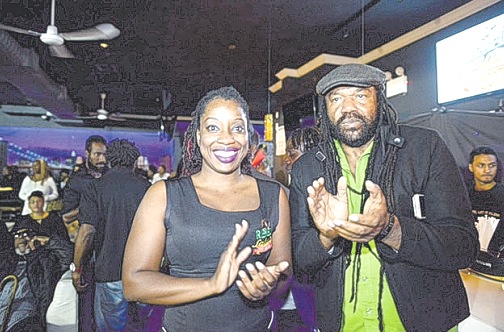 With the major show scene in Jamaica growing suspect by the year, Tony Rebel has stepped up promotion for his Rebel Salute event.

A similar event took place at Club Euro in Fort Lauderdale on November 12. Less than two months before the 24th Rebel Salute, its affable founder is aggressively pitching his brand.

“We’re expanding our product to satisfy the Jamaican audience and, at the same time, export Jamaican culture which is led by reggae music,” Rebel told the Jamaica Observer. “It’s the expansion of a vision.Culture acts like Anthony B and Tarrus Riley will again dominate the festival. But other aspects of Jamaican culture will be showcased, such as food, craft and ganja.

The latter will be represented by the Herb Curb, a booth that made its debut at the 2016 show. Experts manning this station speak on the benefits of ganja, which is synonymous with reggae.

In the past, Rebel Salute ‘competed’ with the Jamaica Jazz and Blues Festival in terms of dates. ‘Jazz’ was not held this year and a 2017 return seems unlikely.

Rebel however said he has never been concerned about ‘rival’ shows’ or benefiting from a competitor’s absence.

“What we’re doing for next year is extending our reach an’ that’s why we went abroad — to reach out to outlets like media and the Diaspora to show that we are a brand. We’re looking to attract more people,” he explained.

Rebel Salute was first held in 1993 at Fayors Entertainment Centre in Manchester. It next moved to Brooks Park in that parish, then Alpart Sports Club in Nain, St Elizabeth, where it had an extended run.

The show has been held at Plantation Cove for the past four years. Details of Rebel Salute 2017 will be announced at its Kingston press launch in early December.