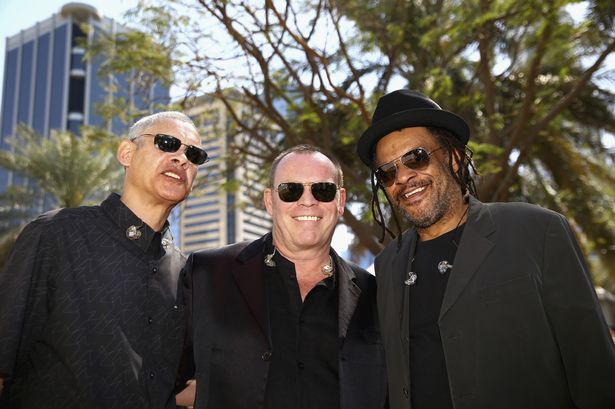 There’s a fruity row over the use of the name UB40 – but perhaps the two factions could put their differences aside with a glass of Bordeaux.

A new tipple, called Red Red Wine in case you hadn’t guessed, has been launched by Ali Campbell, Astro and Mickey Virtue in honour of the classic hit, which reached number 1 in 1983.

That sparked a row with the original UB40 – led by Ali’s brother Robin – which made it as far as the High Court last year.

Now entering the scene is the limited edition bottle called Red Red Wine Bordeaux Supérieur, priced at £28.50, which is produced with a mix of Merlot and Cabernet Franc grapes.

One of the bands biggest hits, it was originally penned by Neil Diamond in 1967, before UB40’s reggae rendition was released in 1983 on their album Labour of Love.

The single stormed to the top of the UK and US billboard charts, as well as taking the top spot in Ireland, the Netherlands and New Zealand.

The video for the song was famously filmed at the Eagle and Tun, on the corner of Banbury Street .

After being closed for years the boozer reopened its doors over New Year 2016.

Should the pub wish to stock the new bottle they may want to read the tasting notes.

A supple palate, smooth and easy to drink, with an excellent balance and long finish.

“The characteristics of the fruit and barrels are married perfectly, creating a charming and elegant wine. Pairs well with roasted or grilled meats and cheese.”

It is produced from a blend of two grape varieties, Merlot and Cabernet Franc.

Red red wine in a modern beat style – you might say. You can purchase the wine on the Eminent website.

A UB40 spokesman said: “UB40 have absolutely nothing to do with this product, It is a cheap and frankly embarrassing publicity stunt by ex members.”

Source: There’s a new wine named after a UB40 classic hit – and its name couldn’t be more obvious – Mirror Online