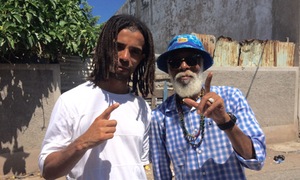 As news dawned that the US had installed a white supremacist in the White House, some found consolation in the idea that his presidency might at least make for some excellent music in response. Was this a desperate grasp for a silver lining? Or was it, as some people suggested, a tasteless opinion which trivialized the very real pain and suffering that now seems likely for many? After all, who cares about pop music when minorities are being persecuted and abortion rights rescinded?

It was interesting to think about all this while watching rapper and poet Akala’s exploration of his musical heritage in Roots, Reggae, Rebellion (BBC4). At first, I wasn’t sure a roots reggae documentary was the most vital musical story to be telling right now, but watching in the wake of the most divisive US election in history, it felt timely.

Akala travels to Kingston to trace the path of roots reggae, from its links to Rastafarianism to its peak as a global cultural phenomenon. The music pioneered by people like Burning Spear, Big Youth and Bob Marley spoke of struggles of the past, but also documented the present during a decade in which Jamaica was plunged into violent political and economic chaos. At times, it was reggae that provided the hope and unity the country craved – at the 1978 One Love Peace Concert, Marley brought the leaders of Jamaica’s two main political parties on stage to join hands.

As blues dances helped spread the music through the UK, it developed its own political identity here, too. We see poet Linton Kwesi Johnson describing how, in the 1970s, black people were regularly kicked, beaten and framed by a racist police force. Reggae provided the soundtrack to the fightback and, as footage of the Birmingham band Steel Pulse playing live in Ku Klux Klan masks attests, it was perfectly capable of making provocative statements on these shores.

Other artists who felt similarly disconnected from mainstream society soon picked up on reggae’s message and incorporated it into their own, such as punk band the Ruts, who became fixtures in anti-racist campaigns like Rock Against Racism. So yes, pop music can be a brilliant escape, but it can also be a lot more than that. It can provide understanding, build movements and, in Akala’s words, “shape an entire generation’s worldview”. There’s nothing trivial in that.

Source: Roots, Reggae, Rebellion review – get up, stand up, for the music that changed the world | Television & radio | The Guardian