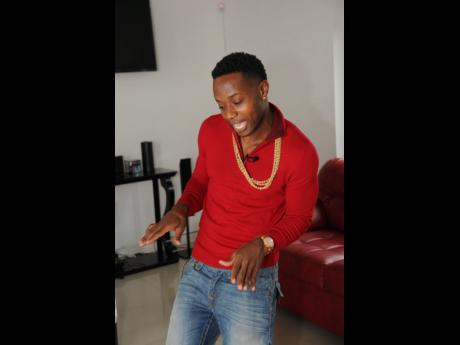 Dancehall artiste Razor B is continuing to break new ground in his career.

The entertainer, who switched management team earlier this year, is currently in Europe on a six-week tour, his first since he burst on to the music scene in 2015. The Hot Up singer, who left the island over the weekend, told THE WEEKEND STAR that he is overwhelmed by the support he has been receiving in Europe thus far.

“I can honestly say I didn’t know that my songs were so popular here,” he said, revealing that his first show in Amsterdam was completely sold out. “I knew there was a demand for my music there, but I’m overwhelmed by the response. The venue where the show was being held in Amsterdam was so packed it couldn’t hold anybody else.” Based on the response from his first show, the entertainer is expecting that his other performances will receive similar support.

“After that performance and the love the crowd showed me, I have no doubt in my mind that the message got to the other countries, so I’m expecting a great turnout at all the other stops.”

The tour, titled Happy Moment, will take the entertainer to countries such as Sweden, Switzerland, Finland, Germany, Austria and France. Razor B has already begun planning his next move.

“There are two more tours in planning – one in the Caribbean and the other in Canada. We are just finalizing a few more things before we give those details to the public,” he said, explaining that he was looking forward to touring even before his first hit song. “I believe the hard work that me and my team put in over the years is finally paying off and I’m just enjoying it.” Razor B said he is still writing and recording and promises his fans new material in the near future.

“I am in the studio working on more universal songs, but still not leaving out the ladies. I do music for people to have fun, so I will continue creating music for people to enjoy.” The tour is in association with Dancehall Cookies out of Europe, as well as Outaroad Music and Chris Yaad Rock. It will end in mid-December.

Source: Razor B on first tour since getting big break | Entertainment | Jamaica Star