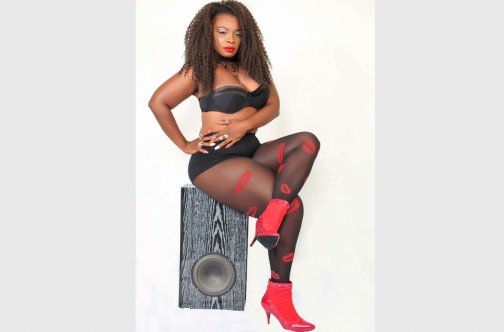 Female dancehall deejay Pamputtae is enjoying fair success with her single Sticky Whine. The song, which is accompanied by a dance move created by Pretty Pretty, has been doing the rounds at dancehall sessions and has become a favourite, especially among the females.

Speaking with Splash, the ‘fluffy’ dancehall artiste explained how the song came about.

“A girl name Pretty Pretty created the dance and me see it and like it, so me and the team just put the song together and released it. She really wasn’t in the streets a promote the dance at the time, but me start promote it and it really take off. She really a promote it now, though, and it a get crazy strength a road,” she said.

Sticky Whine was produced by Good Youth Production and released in July.

The dance move involves several hip gyrations and sudden stops.Pamputtae said she hopes both the single and the dance will get the approval stamp from international stars like Beyonce and Rihanna.

“Me want Sticky Whine get really global so all Beyonce and Rihanna start dance to it, because once they approve it the dance will instantly reach another level. I want both the song and the dance to be timeless. In order for that to happen, I know it will take a lot more promotion and marketing skills because, we all know, it is especially harder for a female,” she said.

“I really don’t know, but its is so hard for us females in the dancehall industry. As they say, dancehall is a man’s world and we have to pay to live in it. This is even obvious with even the rhythms that are putting out that sometimes features one female and 20 males, but it’s the males that really get the airplay; but us females just have to keep fighting,” she added.

Pamputtae, given name Eveanna Henry, was introduced to the local entertainment scene in the early 2000s as a dancer via the Dutty Fridaze streets dances held in Fletcher’s Land in Kingston.

Her big entry into the recording world came in 2006 when she did an intro for Tony Matterhorn for his song Goodas Fi Dem She later went on to release other singles including It Good, a collaboration with Spice called Slim vs Fluffy,

Queen Inna Di Ring, and her most recent Rum Sexy.