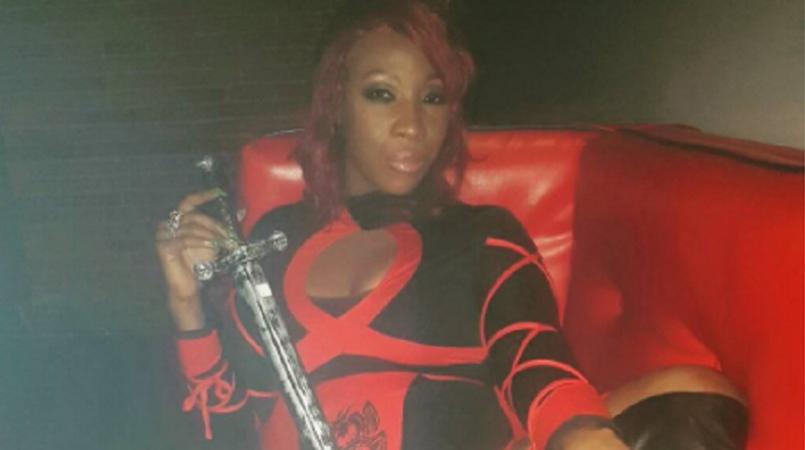 Dancehall star Macka Diamond is in the middle of a firestorm on social media after posting a picture of herself in a Halloween costume on her Instagram page.

In the photo, Macka’s legs are wide open and she is seen clutching a sword pointed suggestively towards her groinal area. Some users upbraided her on the carnal nature of the photo while others defended her. The pic has racked up several hundred shares all over various social media platforms.

Talk show host Ragashanti was one of her more vocal supporters as he approved of the picture. Others made reference to Macka’s age calling the pic inappropriate. One female was particularly scathing calling the pic gross and disgusting.
Macka Diamond shot back via her page saying: “she a musssi me madda what a stress she tek up on her head today im jus having fun reading her comments she made my day she has never comment on none of my gud pics but here she r now so let her keep making an a** of herself while i fulljoy her making my pic viral”.
Other comments included:
“@mackadiamond1 enjoy yuh life mi chargie. Intelligent, secure people understand the context of your pic, and feel no need to engage in negativity, and superficial shaming in order to bring you down.”
“Ewww. No mama skip a page. Better yet one book. I don’t like this pic.”
“No shame. Leave something for ur man.”
“Its not the clothing it’s the pose this is so wrong for a grown a** woman.”