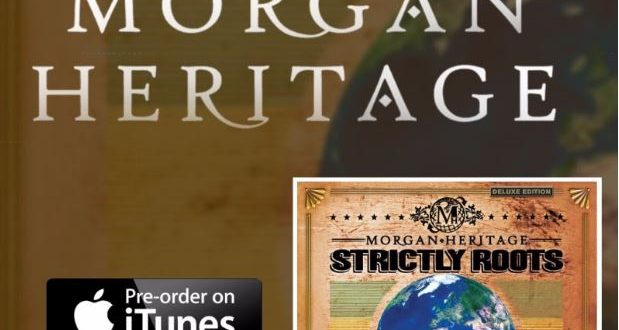 In spring 2015 under their own CTBC Music Group imprint label, the Royal Family of Reggae Morgan Heritage released “Strictly Roots”, their anticipated tenth studio album. The chart topping album debuted to rave reviews while amassing various recognition and awards including the coveted Grammy for Best Reggae Album. “Winning our first Grammy for this album is special because it’s our first release as an independent artist on our label CTBC Music Group and to win the Grammy with the support of our partners at Empire and IDC is very reassuring. It tells us that our peers recognize our contributions to our genre of Reggae Music. ” – MHTo mark the journey of the award winning album, the band intensively toured worldwide to sold out venues, and offered an insight to fans with multiple mini documentaries from their worldly travels. And now to the delight of music lovers and just in time for the holiday season, Morgan Heritage is releasing “Strictly Roots, the Deluxe Edition” on December 9th, 2016.

Speaking of the Deluxe project which includes remixes and previously unreleased songs, Morgan Heritage explained the remix selection process, “Last year we joined forces with Indaba Music on a remix contest where we asked fans, producers and DJ’s alike to do remixes for the song through Indaba Music and their 1 million+ members. The team at Indaba was amazing and the selection process to choose the winner was tougher than we thought it would be because there were so many great remixes but we had to pick only 3 finalists that were eclectic and captivating all at the same time.”

“Strictly Roots, the Deluxe Edition” comprises the remixes of Light It Up feat Jo Mersa Marley, the son of 11 time Grammy winner Stephen Marley and grandson of the great Bob Marley. “There are a few remixes of Light It Up feat Jo Mersa Marley. One from Silencyde, a young talented producer from Arizona that won the Light It Up remix contest. A second from Canadian producer Dubmatix who is a 6 time Juno award winner/nominee. The 3rd remix was done by Guido Craveiro who is one of the masterminds behind the sound of the award winning and multi-platinum selling group Seeed from Germany. It was an honor to work with these super talented producers.”

The Deluxe edition also features 4 bonus songs. Speaking of each track, the band elaborated on their meanings “Come Fly feat Flogging Molly is a song about freedom of the mind, body and spirit. Rise Up is about never loosing faith while standing up for your rights in life. Talk Dem Ah Talk encourages everyone to ignore the noise out in the world and don’t let the naysayers nor hypocrites hold you back no matter what.And Lion Order is a lifestyle in which living a clean life and giving daily praise to our father in Zion among other things keeps us strong like a lion. ”

Morgan Heritage “Strictly Roots Deluxe Edition” is now available for pre-order, “We’d like this Deluxe Edition of Strictly Roots to light up everyone’s holiday season with love from our family to yours. Everyone should get ready for the new album scheduled to be released in April 2017 and stay tuned to our social media as we get ready to premiere the 2nd single from the upcoming album on the Back To Basics Promo Tour in December. ”

With a catalog of songs that very few artists could rival, Morgan Heritage has delivered the soundtrack of our lives, they have played a pristine role in shaping our very idea of what Reggae is.