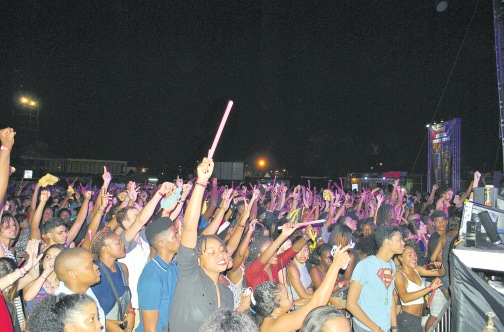 This is the band’s fifth-consecutive ‘tour of duty’.

“Our main objective is to create an interactive experience that patrons can just fully immerse themselves while enjoying a completely dynamic sound. Each year we try to up the ante,” said organiser Kamal Bankay.

“Every year is unique in terms of stage design and new music released by the headliners, Major Lazer. We will also be having an exclusive viewing deck by Bacardi Rum to showcase some cool experiential activations with our bar experience,” he continued.

Major Lazer has worked with a number of dancehall/reggae acts. Their first album, 2009’s Guns Don’t Kill People… Lazers Do, was recorded at Tuff Gong studio in Kingston and featured a who’s who of dancehall acts including Vybz Kartel, Ward 21, Busy Signal, Mr Vegas, Turbulence, and T.O.K.

“Many styles of music from around the world will be on display in this one show,” said Major Lazer’s Walshy Fire. Other members of the outfit are Diplo and Jillionaire.

Bankay shared as to why Major Lazer is a hit locally.

“They definitely keep it real and try and be as authentic in their music and activities as possible. They don’t party in the snobby clubs or parties; they want to be on street level with the ravers from every country, colour, and creed… making lasting memories.”