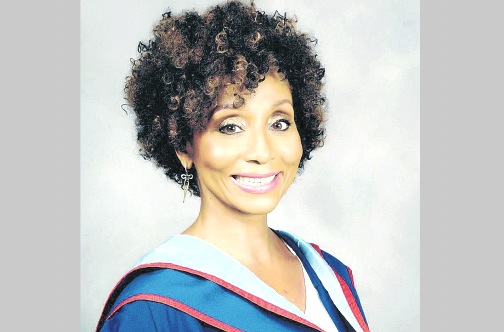 Singer Nadine Sutherland is still beaming, having proudly stepped across the stage of The University of the West Indies (UWI) Mona campus with a master’s degree in cultural studies last Friday.

When the Jamaica Observer caught up with her yesterday, she said since word got out that she had completed the postgraduate programme, the support has been overwhelming.

“I have always wanted to go back to school. I spent my 20s on the road as an artiste and was always somewhat envious of my friends who could speak of their college days. During the 1990s, I was in London recording and I applied and was accepted to study law, but then came the hit song Action and, as they say, the rest is history. But the quest for university-level education never left me,” she said.

In 2012, Sutherland was no longer part of the panel for the talent show Digicel Rising Stars and the desire for tertiary-level education rose again. She heard of the master’s in cultural studies programme and gave it a shot.

“Because I didn’t have a first degree (she holds a diploma in business administration from Excelsior Community College) I had to do some undergraduate courses, and being admitted into the master’s programme was contingent on how well I did at this course of study. For me, failure was not an option,” she said. “I was excited to finally be at UWI, but intimidated at the same time. But I realised I had my life experiences and would use this to my advantage.”The research paper was the most difficult of her courses. She settled on: ‘Vocal Styles In Jamaica: A Study of Hegemonic Disillusion Displayed In Pop Music Culture And The Role Society Played In Informing Them.’

“Even my supervisor was a little baffled when I came up with this topic. But it is virgin territory; no one has looked at the root of our vocal styles in Jamaica. I had to research areas such as political history, ethno-musicology, cultural theories, Jamaican history as well as listen to a lot of music — from mento to dancehall —which I thoroughly enjoyed.”

Her ‘aha moment’ came when she found the link between Jamaican music and American Rhythm & Blues (R&B).

“There is a historical trajectory which links our sound to that of R&B artistes. We all know how much a staple R&B was and still is to us as Jamaicans. We have really grown up on it. It was seen as being sophisticated, but even more poignant is the fact that we could see ourselves in many of these artistes who were of African-American descent, so that allowed us to relate to it even more. In this I found why I sing the way I do,” she explained. “When you compare the work of The Wailers, those early songs Like I’m Still Waiting, and Gypsy Woman by The Impressions, the similarities are uncanny.”

Now in her late 40s, Sutherland is a former child star. She won the Tastee Talent Competition and had a string of hits, including:

Starvation On The Land, Action, Anything For You, Until, Please Me, Pair of Wings, andBabyface.