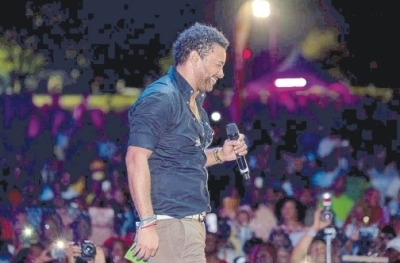 With his vast repertoire of hits songs, Shaggy held the jam packed venue under his musical spell, especially the females.

Prior to putting a lid on the day’s proceedings, Shaggy was preceded by a number of strong performances. They include singer Twiggy whose Do Me Baby, I Want Your Love and Tears on My Pillow provided a bit of warmth on the evening.

Chaka Demus and Pliers reeled off hits such as Tease Me, Murder She Wrote, Bam Bam and She Don’t Let Nobody, while Bajan soca star Rupee help put patrons in a dancing mood with What Happens in the Party and Tempted to Touch. His latest single Tipsy on Black Shadow Records’ Happy Days riddim was also well received.

Singing Melody sang his way into the hearts of the lovers with Want You Back, Let it Flow and Say What.

Oil in My Lamp was a hit among patrons.

In the early hours, newcomers Kristine Alicia, Zeke Don, the Code Red Band and Sons of Maestro were in nick form. They received a warm reception from the crowd.

Aside from the acts on the main stage, there were brilliant moments at the Fusion Stage. Yanique Sasha put in a nice set with songs that touched on matters of the heart and social issues.

The deejay/singing duo J Stone and K Charlz, both of whom relocated to Fort Lauderdale from Jamaica a few years ago, were impressive during their set. Patrons marveled at their showmanship and lyrical prowess and some patrons felt they should have been on the main stage.

“This is a real great experience for me. It is my first time coming to the jerk festival and I am totally blown away,” said Charlz.

Former National Security Minister Peter Bunting, who was spotted among the crowd with his wife and daughter, had high praises for the event.

“I am fascinated to see the amount of people here. Not only is it a Diaspora event but it receives a lot of support from the community as well. Right now, I am walking around trying to see which of the foods I am going to try,” said Bunting.

Miss Jamaica World 2016 Ashlie Barrett, who participated in the Celebrity Cook-off which was won by Todd Tongen, an

ABC news anchor, said it was her first time coming to the event.

“It’s fantastic. It represents us as Jamaicans — great food, fantastic people and great entertainment and fashion.”