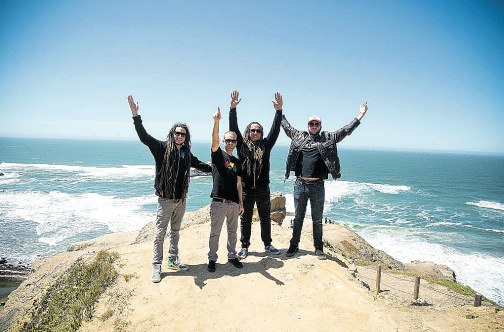 The Movement returns to the top 10 of the Billboard Reggae Album Chart this week with Golden, which debuted at number one in April.

It jumps from 11 last week to number seven. Released by Rootfire Cooperative, Golden contains 12 tracks including a collaboration with reggae artiste Collie Buddz.

Formed in Columbia, South Carolina, in 2004, The Movement is based in Philadelphia. Golden is the quartet’s sixth album and their second entry on the Billboard reggae chart; they previously reached number two with Side By Side in 2013.

Elsewhere, Rebelution continues its dominance by occupying the top positions. Live At Red Rocks returns to number one while Falling Into Place is number two.

Jumping from seven to number three is Stephen Marley with Revelation Part II: The Fruit of Life, while Set In Stone by Stick Figure slips to number four. Beenie Man’s Unstoppable is down to number five while The Frightnrs are number six with Nothing More To Say.

Moving to number eight is Wandering Soul by HIRIE. You & I, the EP from Shifta and Che’Nelle, falls from six to nine. Ziggy Marley’s self-titled set re-enters the top 10, jumping from 13 to 10.