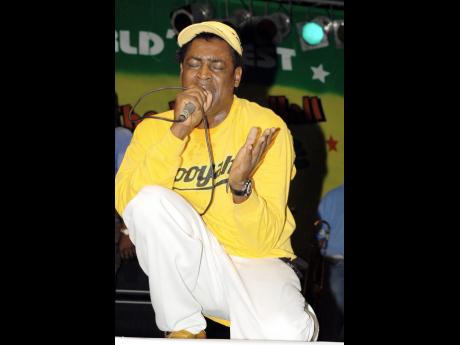 Peter Metro, whose music career spanned the 1980s and ’90s successfully, says though he is not recording music on a regular basis, he is always working, despite not garnering media spotlight.

In fact, he boasts that he is one of the most active veterans in the music industry today. “Every other weekend, I am out there working,” he told THE WEEKEND STAR.

Born Peter Clarke, the veteran entertainer whose career blossomed on the Metro Media sound system in the early 1980s told THE WEEKEND STAR, “I’m still out there in the dancehall with Metro Media once a promoter hires me. I started out with the sound system. I help to establish it throughout the world, then Sky Juice in 1985.”

Metro is promoting a new song called Help, which was released a few weeks ago on the Jese de Musica label. His next live performance is set for tonight on Red Hills Road at a tribute concert for a friend.

Metro told THE WEEKEND STAR, “I just did a show in Panama. Lieutenant Stichie and me did a show in Portmore at one of the entertainment complex on the back road. It was not a full crowd, but those in attendance enjoyed it.”

He revealed that in recent times, he has done Sting (three the hard way) and Rebel Salute.

In November, the artiste will make his return to Grand Cayman alongside veteran deejay General Trees and others. “I am excited to return to Cayman. It’s been over 20 years since my last visit. I have been there 13 times during the ’80s and ’90s,” he told THE WEEKEND STAR.

CHANGES IN THE MUSIC

When asked about the current state of the music, Peter Metro said things and times have changed. “The music is going to change as well. Some people who use to go to dance years ago, some not going any more. The rhythms get faster. Back in my time, there was no dancehall; a just reggae. A dance hall was a place people use to go to and enjoy themselves. All the music was under one umbrella, reggae music. The faster rhythms now are called dancehall and the slower rhythms reggae,” Metro said.

Among the highlight of his career, Peter Metro, who was fluent in Spanish, said he was the first artiste who deejayed in Spanish.

He said: “I was the first artiste to go on tour with Reggae Sunsplash, awarded Best Dancehall Deejay in 1982, Deejay of the Year in 1986 and shared Deejay of the Decade with King Yellowman in 1990”.

Metro also told THE WEEKEND STAR that Sharon Burke was the only manager he has ever retained and that he was the first artiste she managed. According to Peter Metro, his career has inspired Jr Gong and Stephen Marley, who have echoed same sentiments, and he was the first deejay to put a microphone in Yellowman’s hand.

Peter Metro said that he is looking forward to 2017 as he plans to take on Europe. He said: “I have toured Europe extensively during the hay days of my career.”

With a catalogue consisting of songs like Back Way Talk, Life F’ Up, Police Inna England, The Girl Is Mine and many others in the late ’80s as well as in the early ’90s, Peter Metro cemented his space in reggae music as one of its pioneers.